• BizJournals.com, an apolitical suite of city business journals, reports that "Obama tax hikes could hit up to 1.3 million small businesses." I wonder which cutoff Obama is using now. It started at $250K, over the weekend he said $200K, and Joe Biden said $150K on Monday. Pretty soon it will be anyone with automatic withholding.

• Pittsburgh Live reports that a former ACORN staffer has testified regarding the coordination between the Obama campaign and ACORN's various affiliates. Non-partisan, non-profit ACORN. Right. 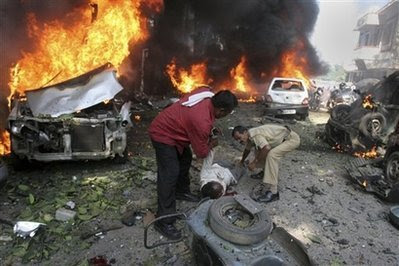 • A series of coordinated explosions in India have killed at least 56 innocent civilians. I suspect militant Quakers. Or neocons. (AP Photo/Anupam Nath)

• The London Daily Mail proclaims the news with a bold, attention-getting headline: One dead, thousands without power and the first October snow in London in 74 YEARS as Arctic blast sweeps across UK. What's the appropriate branding for this massive Goreian scam? "Global warming"? "Climate Change"? "Deadly global non-warming"?

• The CEO of firearm manufacturer Cooper Arms decided to back Barack Obama for president. Only 48 hours later, a company press release concluded with the sentence "We wish him [the former CEO] all of the best in his future pursuits."

• Rick McKee discovered the root cause of Sarah Palin's falling poll numbers.
at 7:41 AM
Email ThisBlogThis!Share to TwitterShare to FacebookShare to Pinterest
Labels: Linkfest