It depends on what the meaning of 'tax cut' is.

One of Barack Obama's most potent campaign claims is that he'll cut taxes for no less than 95% of "working families." He's even promising to cut taxes enough that the government's tax share of GDP will be no more than 18.2% -- which is lower than it is today. 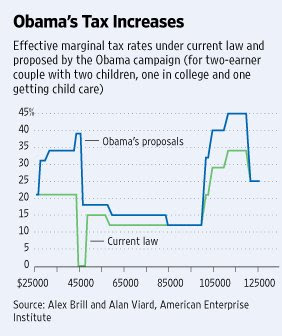 It's a clever pitch, because it lets him pose as a middle-class tax cutter while disguising that he's also proposing one of the largest tax increases ever on the other 5%. But how does he conjure this miracle, especially since more than a third of all Americans already pay no income taxes at all? There are several sleights of hand, but the most creative is to redefine the meaning of "tax cut..."

...[All the tax credits but one] would be "refundable," which is Washington-speak for the fact that you can receive these checks even if you have no income-tax liability. In other words, they are an income transfer -- a federal check -- from taxpayers to nontaxpayers. Once upon a time we called this "welfare," or in George McGovern's 1972 campaign a "Demogrant." Mr. Obama's genius is to call it a tax cut.

Hat tips: Fausta and Larwyn
at 6:24 AM
Email ThisBlogThis!Share to TwitterShare to FacebookShare to Pinterest
Labels: Democrats, Economy, Obama