Is that what he meant by "Change"? And does it worry any of the Obama supporters that the "Fight the Smears" website has to be scrubbed on a near-daily basis because the "smears" turn out to be true?

Here's the Google cache's copy of Barack Obama's official "Fight the Smears" website regarding the candidate's involvement with the vote-fraud specialists known as ACORN (currently being investigated in fifteen states). 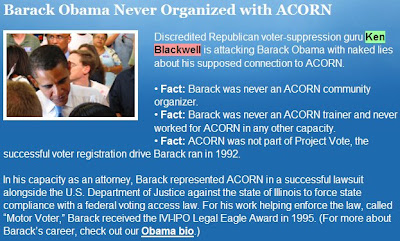 Before: "• Fact: Barack was never an ACORN trainer and never worked for ACORN in any other capacity."

Well, that was the website before Audacity of Hypocrisy located a vintage ACORN article online.

Let’s take a look at a quote from a 2004 article - Case Study: Chicago- The Barack Obama Campaign - written Toni Foulkes, a Chicago ACORN Leader, which was published in the journal Social Policy. Did we mention that Social Policy recently pulled this particular article from their website, while leaving links to all articles up?

Obama took the case, known as ACORN vs. Edgar (the name of the Republican governor at the time) and we won. Obama then went on to run a voter registration project with Project VOTE in 1992 that made it possible for Carol Moseley Braun to win the Senate that year. Project VOTE delivered 50,000 newly registered voters in that campaign (ACORN delivered about 5,000 of them). 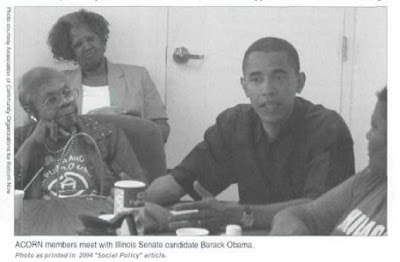 Since then, we have invited Obama to our leadership training sessions to run the session on power every year, and, as a result, many of our newly developing leaders got to know him before he ever ran for office. Thus it was natural for many of us to be active volunteers in his first campaign for State Senate and then his failed bid for U.S. Congress in 1996. By the time he ran for U.S. Senate, we were old friends.

Not only does Foulkes boast of Obama’s ACORN leadership training, but also makes it clear that Obama’s post-law school organizing of “Project VOTE” in 1992 was undertaken in direct partnership with ACORN. The tie between Project VOTE and ACORN is also something that Obama and others have attempted to disprove in recent weeks as ACORN has come under fire for allegations of voter registration fraud.

As recently as March 2008, the Los Angeles Times also made reference to Barack Obama’s involvement with ACORN:

“At the time, Talbot worked at the social action group ACORN and initially considered Obama a competitor. But she became so impressed with his work that she invited him to help train her staff.” (LA Times, March 2, 2008)

Well, that was quick. Look at the "Fight the Smears" site now. 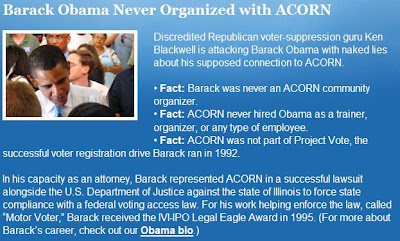 After: "• Fact: ACORN never hired Obama as a trainer, organizer, or any type of employee."

Get it? He wasn't "hired" as a "trainer". I guess he just did it for free. After all, it's for the children.

Isn't this, like, the 804th time the Obama campaign has had to scrub their "Fight the Smears" website? Someone needs to create a "FightTheSmearWatch.com" portal to keep track of all of the outrageous lies, fabrications, and gyroscope-quality spin these crackpots are foisting on an unsuspecting public.