The New York Daily News carved out some time between Brad Pitt sightings to devote a couple of column-inches to leftist scumbag Bill Ayers. Ayers left his spider-hole long enough to visit a panel discussion in Manhattan where the topic of his role in the presidential election was discussed. 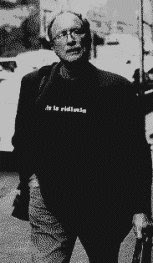 The press was barred from the discussion yesterday at the Stella Adler Studio of Acting near Gramercy Park, but a Daily News reporter managed to get inside.

The former member of the Weather Underground beamed at the attention paid by the audience of about 60 people, many of whom were decked out in Obama gear.

The crowd gave Ayers a warm welcome, guffawed at jokes about "redistributing the wealth" and nodded at his complaints about the "Republican revolution."

After the talk was over, event organizers attempted to sneak Ayers out a back door to avoid the media.

Waiting reporters gave chase, but Ayers sputtered, "No comment," and darted into a cab.

Never forget that Ayers led an organization that, with its affiliates, killed twelve cops and a Brinks guard. Ayers himself came very close to detonating a nail-bomb at a Fort Dix officers' dance, a terrorist act that would have killed and maimed hundreds.

And never forget that the full scope of Barack Obama's relationship with Bill Ayers has never been disclosed. Nor has the mainstream media expressed even the tiniest bit of curiosity regarding their ties. The man only hosted Obama's political coming-out party, served with Obama on the boards of the CAC and the Woods Fund and together directed money to ACORN and the Arab-American Action Network.