Your tax dollars at work: Feds have given ACORN $31 million


An analysis of federal spending reveals that the vote-fraud specialists known as ACORN have received $31 million in taxpayer funds. ACORN, which is under an FBI investigation for a "coordinated national scam" according to the AP, has also received untold millions from state and local agencies that receive federal block grants. 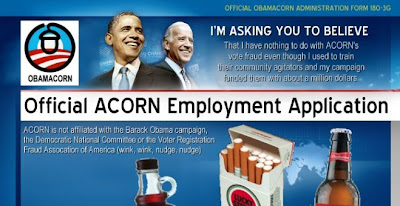 “Senator Obama recently said that he doesn’t need ACORN. Well, American taxpayers don’t need ACORN either. They don’t need ACORN’s voter registration fraud, and they no longer need to support ACORN with federal funds," said Republican House Leader John Boehner. "In conjunction with Fannie Mae and Freddie Mac and its political allies in the Democratic Party, ACORN also played a key role in creating the financial crisis that ultimately put our entire economy in peril. It’s time for us to stop forcing American taxpayers to fund the ACORN machine.” One of the grants to an ACORN affiliate -- a Jan. 17, 2007 award to ACORN Associates in New Mexico -- appears to encourage the use of risky subprime loans, now viewed by many as a contributing factor in the recent freezing up of international credit markets. The title for the grant? “Education and Outreach Initiative/Subprime Lending Component.”

Barack Obama and ACORN played a critical role in the mortgage meltdown that precipitated the financial crisis in which we find ourselves. Beginning with community activism that flooded bank lobbies with angry protesters in the seventies and eighties, ACORN's leverage with Fannie Mae and Freddie Mac reached a high point under the Clinton administration. Another factor working in ACORN’s favor was that its increasing success with local banks turned those banks into allies in the battle with Fannie and Freddie. Precisely because ACORN’s local pressure tactics were working, banks themselves now wanted Fannie and Freddie to loosen their standards still further, so as to buy up still more of the high-risk loans they’d made at ACORN’s insistence. So by the 1993, a grand alliance of ACORN, national Democrats, and local bankers looking for someone to lessen the risks imposed on them by CRA and ACORN were uniting to pressure Fannie and Freddie to loosen credit standards still further.

In June 1995 Clinton and HUD Secretary Henry Cisneros (of Barrett Report fame) announced a comprehensive strategy for dramatically increasing home ownership. ACORN officials were guests of honor at the event. Clinton said, "Our homeownership strategy will not cost the taxpayers one extra cent. It will not require legislation.”

What he meant was that the unstated partnerships between Fannie and Freddie and groups like ACORN would facilitate mortgages to those "who have historically been excluded from homeownership.”

As we now know, Clinton’s plan was an utter disaster and cost taxpayers trillions of dollars. And it was around this time in 1995 when Chicago-area advertisements began hawking mortgages to customers with poor credit, few assets and even histories of bankruptcies. ACORN's role in this disaster is not nearly as well-known as that of Democrats Franklin Raines, Chris Dodd and Barney Frank, but it deserves to be.

And ACORN doesn't have its hands in just taxpayers' pockets. Consider that retired anchorman Tom Brokaw sits on the board of a liberal foundation that has given ACORN nearly a million dollars, presumably to fund its oh-so-pristine voter registration efforts.

If the economy is running on fumes, why would you turn it over to a Marxist who tacitly supports voter registration fraud, would raise taxes significantly and "spread the wealth around"? And if the country takes additional steps towards socialism -- controlling all three branches of government -- how could the U.S. ever return to its roots of individual liberty as envisioned by the Framers?

The answer is to ensure that the crypto-Marxist doesn't win the election, no matter how many bogus registrations ACORN submits and no matter how much crack cocaine it gives out in exchange for votes.
at 6:24 AM
Email ThisBlogThis!Share to TwitterShare to FacebookShare to Pinterest
Labels: Crime, Democrats, Obama, Vote Fraud