Michelle & Barack insist police remain out of sight, out of mind


At least two different police departments have reported that the Obama clan has a bit of a problem with the police. Like, they don't want to see them, cluttering up the view and such. They've apparently instructed police officers and the Secret Service to run out of the Obama couple's line o' sight. In private, mind you.

Jason Kern, a member of the Michigan Tactical Officers' Association, published the following open letter. It would appear to highlight the disdain the Obamas hold for law enforcement. 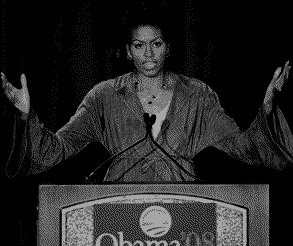 ...members of the Calhoun County Sheriff’s Department, Michigan State Police, (me included) and other local agencies inside Calhoun County
are working with Secret Service in the security of Mr. Obama. Mr. Obama’s bus arrives in Battle Creek and pulls into the stadium area. Before Mr. Obama exits the bus, he has the Secret Service get off and tell all Law Enforcement personnel in uniform that they now have to stand behind the bus so Mr. Obama is not seen with anyone in a Law Enforcement uniform before he gets off or while in the public view.

...everyone from Michigan State Police, Sheriff’s Deptments and other agencies look at each other for a brief second, go and stand behind the bus out of sight so Mr. Obama does not have to see, or been seen with, what to him is `undesirables’ since he refuses to been seen or even acknowledge Military or Law Enforcement personnel in uniform. And he wants to be our commander-in- chief!

I am not trying at all to dissuade your vote, but Obama has really cheesed me off... I have heard these stories of Obama making the Police and Secret Service (who protect his... butt) stay out of his eyesight... Well, I learned it well Thursday, October 9th. Michelle Obama was in Clinton Twp., Michigan Thursday for a rally at our biggest High School. My department had a small role in protecting her. About [eight] Officers were detailed to the School for [her] security...

My Sergeant was providing security in a hallway as Mrs. Obama was moving from room to room for different reasons. He was told by the [Secret Service] that when she came down his hall, he had to duck behind the corner and not allow her to see him. He questioned this several times to be sure he heard it right, and the... agent (embarrassed of course) had to hide from her view, too.

It is outrageous that the persons running for the President of our country on the Democratic side, has so much disdain for men and woman in uniform, they demand that they are kept from their view... [Let's] be clear. This was not in the public. This was not an Honor Guard detail standing behind her on stage in front of thousands. This was in a hallway, out of the public eye, and the Obamas refuse to even see an Officer or Soldier in their view. The Police have to hide...

Judgment to lead!
at 6:03 PM
Email ThisBlogThis!Share to TwitterShare to FacebookShare to Pinterest
Labels: extremism, Obama