I have just one question for Barack Obama

Senator Obama, when you first ran for Congress in 2000 you claimed your central experience was the Chairmanship of the $165 million Chicago Annenberg Challenge. Yet now that central qualification is missing from your resume. Is that because it was an utter failure... or because you worked closely with terrorist Bill Ayers for a half-dozen years?

In 2000 Barack Obama addressed the experience issue during his unsuccessful run for Congress.

Question: "One of the criticisms that arises in connection with your candidacy is you simply haven't been in the Senate very long, the State Senate. You have a limited track record in terms of time, what is your argument based on the one term that you've served so far? What makes you prepared for the Congress?"

Obama: "Well, I'm in my second term, but it's true that certainly both Senator Trotter and Congressman Rush have been in elected office longer than I have. I can't deny that. I would argue, though, that my experience previous to elected office equips me for the job. I have a background as an attorney, I've represented affordable housing organizations to build affordable housing, something that's a major issue in the district. I've chaired major philanthropic efforts in the city like the Chicago Annenberg Challenge, that gave fifty million dollars to prompt school reform efforts throughout the city."

Possible answer #1: The CAC's $165 million boondoggle was -- by its own admission -- an utter and complete failure.

Possible answer #2: In 1995 Bill Ayers and Bernadine Dohrn -- who advocate the overthrow of the U.S government to this very day -- launched Barack Obama's career by hosting a "Meet the Candidate" event in their home. Ayers, who founded the CAC, then hired Obama as Chairman of the Board and administrator of $165 million, even though he had no experience other than as a "community organizer." 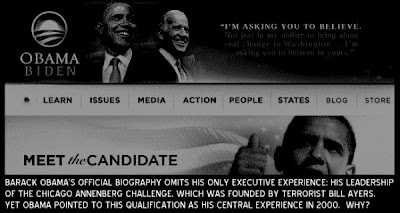 Either answer explains why Obama tossed his CAC experience (arguably his only "executive" experience) down the memory hole.

It's two... two... two... screw-ups in one! Not exactly the judgment we're looking for in a commander-in-chief. And doesn't that phrase ("Commander-in-Chief Obama") send a shiver down your spine?

Update: Obama's website has engineered several delightful evasions. His biography somehow omits his vaunted experience with the CAC and its ill-named "Fact Check" ostensibly explains the Obama/Ayers relationship without mentioning the Chicago Annenberg Challenge or the Woods Fund boards they served on for years.
at 8:22 PM
Email ThisBlogThis!Share to TwitterShare to FacebookShare to Pinterest
Labels: Democrats, extremism, Obama