Shirat Devorah researched the various articles surrounding the recent Somali hijacking of an Iranian vessel and came to an ominous conclusion.

On August 21st, 2008, the MV Iran Deyant, 44,458 dead weight bulk carrier was heading towards the Suez Canal. As it was passing the Horn of Africa, about 80 miles southeast of al-Makalla in Yemen, the ship was surrounded by speedboats filled with members of a gang of Somalian pirates who grab suitable commercial ships and hold them and their cargos and crews for ransom. The captain was defenseless against the 40 pirates armed with AK-47s and rocket-propelled grenades blocking his passage. He had little choice other than to turn his ship over to them. What the pirates were not banking on, however, was that this was no ordinary ship. 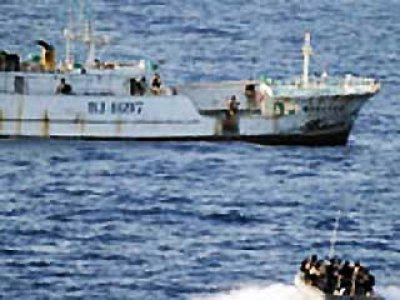 The MV Iran Deyanat is owned and operated by the Islamic Republic of Iran Shipping Lines (IRISL) - a state-owned company [that] regularly falsifies shipping documents in order to hide the identity of end users, uses generic terms to describe shipments to avoid the attention of shipping authorities, and employs the use of cover entities to circumvent [UN] weapons proliferation [regulations].

[The hijacked ship] was brought to Eyl, a sleepy fishing village in northeastern Somalia, and was secured by a larger gang of pirates - 50 onboard and 50 onshore. The Somali pirates attempted to inspect the ship's seven cargo containers but the containers were locked. The crew claimed that they did not have the "access codes" and could not open them. Pirates have stated they were unable to open the hold without causing extensive damage to the ship, and threatened to blow it up.... the pirates broke open one of the containers and discovered it to be filled with packets of what they said was “a powdery fine sandy soil” ....

Within a period of three days, those pirates who had boarded the ship and opened the cargo container with its gritty sand-like contents, all developed strange health complications, to include serious skin burns and loss of hair. And within two weeks, sixteen of the pirates subsequently died, either on the ship or on shore... ...At this writing, the MV Iran Deyanat is at anchor, watched closely by American, French and Russian naval units. 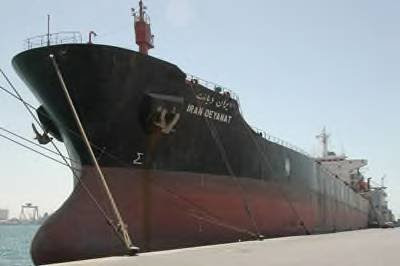 [Russian sources claim she] was an enormous floating dirty bomb, intended to detonate after exiting the Suez Canal at the eastern end of the Mediterranean and in proximity to the coastal cities of Israel. The entire cargo of radioactive sand, obtained by Iran from China (the latter buys desperately needed oil from the former) and sealed in containers which, when the charges on the ship are set off after the crew took to the boats, will be blasted high into the air where prevailing winds will push the highly dangerous and radioactive cloud ashore.

Given the large number of deaths from the questing Somali pirates, it should be obvious that when the contents of the ship’s locked cargo containers finally descended onto the land, the death toll would be enormous. This ship was nothing more nor less than the long-anticipated Iranian attack on Israel.

Fox News interviewed an expert whose analysis would seem to confirm these conclusions:

Chemical experts say the reports sound inconsistent with chemical poisoning, but may reflect the effects of exposure to radiation.

"It's baffling," said Jonathan Tucker, a senior fellow at the James Martin Center for Nonproliferation Studies. "I'm not aware of any chemical agent that produces loss of hair within a few days. That's more suggestive of high levels of radioactive waste."

Linked by: Ace of Spades. Thanks!
at 9:03 AM
Email ThisBlogThis!Share to TwitterShare to FacebookShare to Pinterest
Labels: extremism, War