And I do mean Red Alert. I'm guessing the anointed one thought this particular audiotape had disappeared down the memory hole. Or he'd utterly forgotten about it, what with he and his wife busily planning their move into the White House.

In 2001, in an interview with WBEZ public radio, Barack Obama explicitly endorsed a "redistribution of wealth". His words. Well, Karl Marx's words too, but you know what I mean.

"If you look at the victories and failures of the civil rights movement where it succeeded was to vest formal rights in previously disposed peoples... But the Supreme Court never ventured into the issues of redistribution of wealth and more basic issues of political and economic justice in this society..." 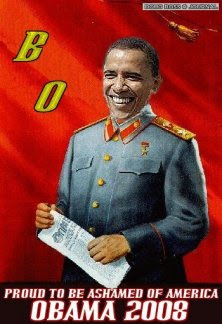 "...To that extent, as radical as I think people try to characterize the Warren Court, it wasn’t that radical. It didn’t break free from the essential constraints that were placed by the founding fathers in the Constitution, at least as its been interpreted and Warren Court interpreted in the same way, that generally the Constitution is a charter of negative liberties. Says what the states can’t do to you. Says what the Federal government can’t do to you, but doesn’t say what the Federal government or State government must do on your behalf, and that hasn’t shifted and one of the, I think, tragedies of the civil rights movement was, um, because the civil rights movement became so court focused I think there was a tendency to lose track of the political and community organizing and activities on the ground that are able to put together the actual coalition of powers through which you bring about redistributive change. In some ways we still suffer from that."

It's clear that the Framers were "all about" redistribution of wealth. They were all up in our faces about it, in fact.

Of course, the American people favor economic liberty over Marxism by the razor thin margin of 84% to 13%. But that will change once they get used to a true workers' paradise.
at 6:15 AM
Email ThisBlogThis!Share to TwitterShare to FacebookShare to Pinterest
Labels: Democrats, Economy, Obama