The New York Post reports that Jessie ("Hymie-town") Jackson has sounded the death knell for Israel. 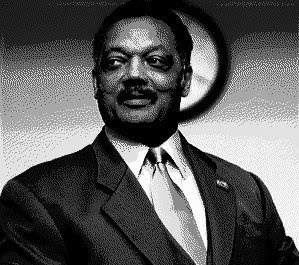 PREPARE for a new America: That’s the message that the Rev. Jesse Jackson conveyed to participants in the first World Policy Forum, held at this French lakeside resort last week.

He promised “fundamental changes” in US foreign policy - saying America must “heal wounds” it has caused to other nations, revive its alliances and apologize for the “arrogance of the Bush administration.”

The most important change would occur in the Middle East, where “decades of putting Israel’s interests first” would end.

Oh, and did you know that the evil Jews control America?

Jackson believes that, although “Zionists who have controlled American policy for decades” remain strong, they’ll lose a great deal of their clout when Barack Obama enters the White House.

The Obama campaign attempted to distance itself from Jackson's comments, noting that he was not an official adviser. Jackson, however, was having none of it. 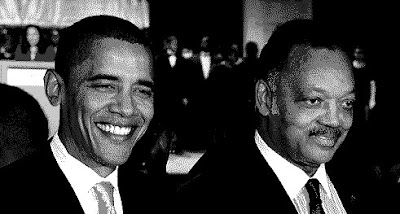 ....Obama has been "a neighbor or, better still, a member of the family." Jackson's son has been a close friend of Obama for years, and Jackson's daughter went to school with Obama's wife Michelle.

"We helped him start his career," says Jackson. "And then we were always there to help him move ahead. He is the continuation of our struggle for justice not only for the black people but also for all those who have been wronged."

And one other thing: prepare to whip out the checkbook. Jackson says reparation payments are on the agenda (the 600,000 Union soldiers who died freeing the slaves don't count for much in Jackson's eyes).

Will Obama's election close the chapter of black grievances linked to memories of slavery? The reverend takes a deep breath and waits a long time before responding.

"No, that chapter won't be closed," he says. "However, Obama's victory will be a huge step in the direction we have wanted America to take for decades.

Hey, I've got an idea! Let's kill off Charter Schools while we're at it. That should help students even more!