'Joe the Plumber' forced to launch a 'Fight the Smears' site


'Joe the Plumber' is under attack by Democrats and the mainstream media (but I repeat myself). In fact, he's had to launch his own 'Fight the Smears' website. 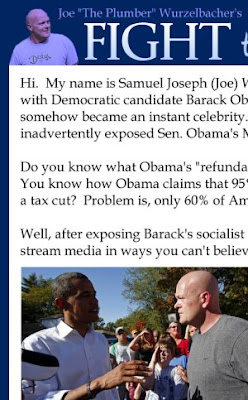 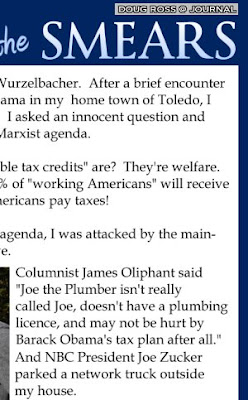 The liberal nutjob columnist James Oliphant (I hear that's the description he prefers) said that "Joe the Plumber isn't really called Joe, doesn't have a plumbing licence, and may not be hurt by Barack Obama's tax plan after all."

Meanwhile the forsaken residents of Grove Parc are suffering in Barack Obama's Englewood neighborhood with nary a reporter to notice the uninhabitable buildings. And Bill Ayers, Jeremiah Wright, Louis Farrakhan, Father Pfleger, Tony Rezko, Rashid Khalidi, Edward Said, and the entire range of Marxists and terrorists who launched Obama's career are given a pass by the mainstream media.

Update: What is it about plumbers?

Linked by: Gateway Pundit and Denny. Thanks!
at 8:28 PM
Email ThisBlogThis!Share to TwitterShare to FacebookShare to Pinterest
Labels: Democrats, MSM, Obama