CNet News reports that Scotland's Cascade residential wind turbine is headed to the U.S.. Cascade claims that it is significantly quieter than traditional wind turbines and that it can be mounted directly on a home. 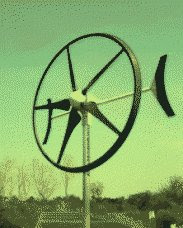 Like other wind turbines, the Swift has blades that turn and power a generator. But rather than the typical three blades, the Swift has five and a ring that goes around them. That "outer diffuser" ring cuts the noise level to 35 decibels and reduces vibration, according to the company... The turbine, with a 7-foot diameter, also has two fins to direct the turbine to face the wind. It can turn 360 degrees and shut down if the wind is too high.

It can generate 1.5 kilowatts with 14 mile-per-hour wind and about 2,000 kilowatt-hours over a year, the company said. U.S. households typically consume between 6,500 and 10,000 kilowatt-hours in a year, according to the U.S. Energy Information Administration.

At a cost of $10,000 installed, it's a bit lower than the typical per-watt cost of solar electric panels. But state rebates, the cost of electricity, and the wind or solar resource make a big difference on the actual up-front cost. Cascade estimates the payback on the upfront cost can be as low as three years but that it varies widely...

Ten grand seems awfully rich, but the concept is a good one.
at 7:29 PM
Email ThisBlogThis!Share to TwitterShare to FacebookShare to Pinterest
Labels: Energy