Barack Obama: "The acorn doesn't fall far from the tree"


Where's Jimmah Carter when you need him to investigate fair elections? 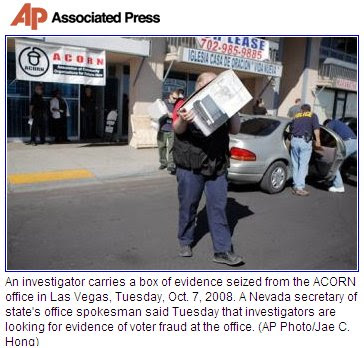 The notorious group called ACORN has infected the voting process in at least fifteen states this year. It is under investigation in those states for submitting thousands of fraudulent voter registrations, a consistent theme for the group over the last several decades. It has organized more vote-fraud schemes than any other group in the history of the United States.

Barack Obama's campaign, for starters, which reportedly gave it nearly a million dollars. Oh, and taxpayers are funding it as well through our beloved Democratic Congress. And Fannie Mae was (and perhaps is) a major contributor to ACORN too.

Ohio: "...People asked to register "10 to 15" times in Ohio... ACORN has been implicated in voter-fraud schemes in 15 states - including Ohio, from where The Post’s Jeane MacIntosh reports today that a Board of Elections investigation has unearthed evidence of widespread voter fraud... Two voters told MacIntosh they had been dragooned by ACORN activists into registering several times - one reporting having signed up “10 to 15″ times... ACORN canvassers 'would ask me if I was registered,' he said. 'I’d say yes and they’d ask me to do it again...'" 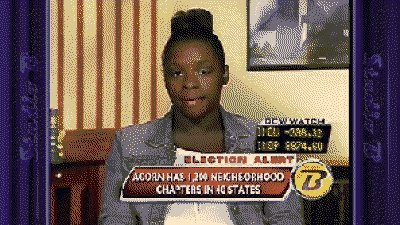 Nevada: "...state authorities are raiding the Las Vegas headquarters of an organization that works to get low-income people to vote. A Nevada secretary of state's office spokesman said Tuesday that investigators are looking for evidence of voter fraud."

Pennsylvania: "...in Allegheny County District Attorney Stephen Zappala confirms an investigation of potential voter fraud involving ACORN... Currently the election bureau is reviewing some 45,000 new registration applications and Zappala says some of them have forged signatures of people who may or may not exist..."

Missouri: "...there is a long history and a number of close connections between ACORN and Senator Obama... [he has praised] ACORN and [given] $800,000 contribution to a subsidiary... In 2007, four ACORN employees were indicted in Kansas City for charges including identity theft and filing false registration. In 2006, eight ACORN employees plead guilty..."

Washington: "In July last year, seven ACORN workers were charged with felonies in the largest voter fraud case ever in Washington state. Their enthusiasm for registering Democratic voters led them to submit more than 1,800 fraudulent voter registration forms, filled out from the telephone book. Five pled guilty. ACORN paid a fine."

Ohio: "After the smoke cleared in the 2004 Ohio presidential election, election officials reported that ACORN made a repeated practice of submitting large stacks of voter registration documents at the last minute, filled out months prior but held so late that any verification was impossible."

Also in Ohio: "ACORN workers were 'given crack cocaine in exchange for fraudulent registrations that included underage voters, dead voters and pillars of the community named Mary Poppins, Dick Tracy and Jive Turkey.'"

There's really no pattern I can discern here. Just a couple o' coincidences.

You mean that ACORN?

The same ACORN that Obama served as a trainer for? The same ACORN given millions by he and Bill Ayers through the Woods Fund and the Chicago Annenberg Challenge?

The same ACORN that Obama's campaign was just caught lying about?

Fact: Barack was never an ACORN trainer and never worked for ACORN in any other capacity. 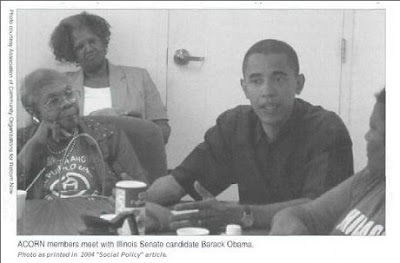 Obama not only trained at ACORN, he worked with ACORN in the 1992 election, he was an ACORN lawyer and he was endorsed by ACORN... As Barack Obama says-- "The ACORN does not fall far from the tree."

Well, aside from all that, Obama had no relationship with ACORN whatsoever.

Update: Dan Riehl describes how ACORN helped Barack Obama win in 2006: Does this sound like the way a federally funded, non-partisan group should?

A man at the center of a voter-registration scandal told The Post yesterday he was given cash and cigarettes by aggressive ACORN activists in exchange for registering an astonishing 72 times, in apparent violation of Ohio laws... 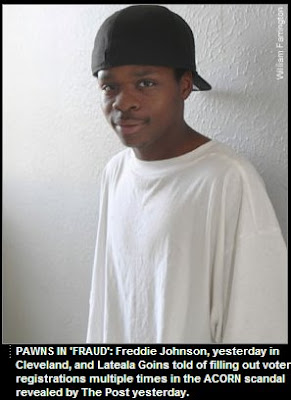 ..."Sometimes, they come up and bribe me with a cigarette, or they'll give me a dollar to sign up," said Freddie Johnson, 19, who filled out 72 separate voter-registration cards over an 18-month period at the behest of the left-leaning Association of Community Organizations for Reform Now.

at 12:45 AM
Email ThisBlogThis!Share to TwitterShare to FacebookShare to Pinterest
Labels: Crime, Democrats, Obama