In 1995 Barack Obama had a coming-out party at the home of two well known local liberals: William Ayers and Bernardine Dohrn. While Ayers and Dohrn may be thought of in Chicaog as "activists", they’re better known throughout the country as two of the most vicious — and unrepentant — terrorists from the anti-war left.

James Taranto, writing at Best of the Web:

Over the weekend Sarah Palin accused Barack Obama of "palling around" with terrorists--a reference to his longstanding friendship and professional association with Bill Ayers and Bernardine Dohrn, husband-and-wife Chicago college professors who are unrepentant about their activities in the Weather Underground gang.

According to an "analysis" by Douglass Daniel of the Associated Press, "[Palin's] attack was unsubstantiated."

Palin's words avoid repulsing voters with overt racism. But is there another subtext for creating the false image of a black presidential nominee "palling around" with terrorists while assuring a predominantly white audience that he doesn't see their America?

In a post-Sept. 11 America, terrorists are envisioned as dark-skinned radical Muslims, not the homegrown anarchists of Ayers' day 40 years ago. With Obama a relative unknown when he began his campaign, the Internet hummed with false e-mails about ties to radical Islam of a foreign-born candidate.

The Weatherman Organization and its affiliates killed numerous police officers. They are depicted below.

In 2006 an unapologetic Ayers himself wrote: 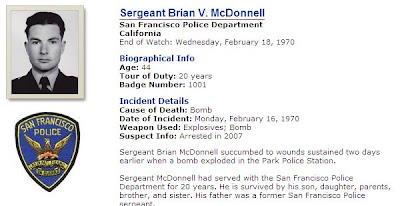 SGT. BRIAN McDONNELL - SFPD (Bomb)
We issued our first communiqué—a word we borrowed from Latin American guerrillas—called a “Declaration of War” and signed by “Bernardine Dohrn”, in May 1970. It was filled with defiance and hyperbole. We threatened to bomb “a major symbol of American injustice,” and when, a little more than two weeks later the promised explosion rocked the New York City Police Headquarters on Centre Street, the Weathermyth was fully launched. 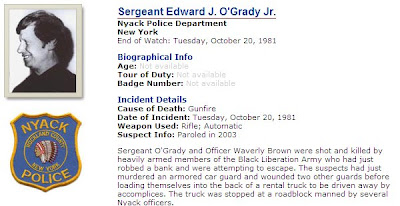 SGT. ED O’GRADY - NYACK, NY PD (Shot)
...with some luck—we would participate in an upheaval that would destroy the death machine and allow human beings to reach the full measure of their humanity. Revolution! 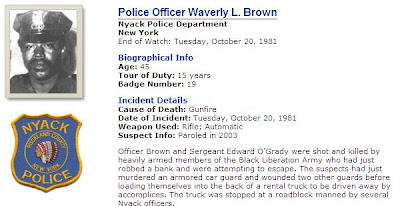 OFC. WAVERLY BROWN - NYACK, NY PD (Shot)
We would bring the war home as we had planned, but with measured force, with precision. We would draw an angry sword against white supremacy, retaliate for racist attacks, and fight alongside our Black revolutionary comrades, but from a new and liberated space. 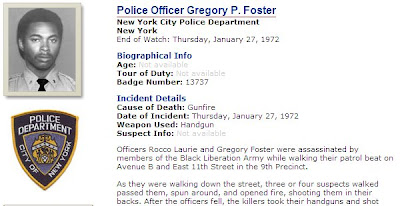 OFC. GREG FOSTER - NYPD (Shot)
This was a time when I, along with most of my closest friends, were referred to again and again as “home-grown American terrorists.” That’s what Time magazine called us in 1970, and the New York Times, too, and that was the word hurled in my direction from the halls of Congress. Terrorist... 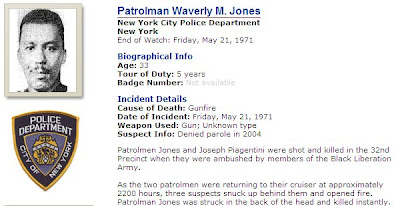 OFC. WAVERLY JONES - NYPD (Shot)
I thought of myself immodestly as a freedom fighter, but I knew that “terrorist” was tattooed over every inch of me 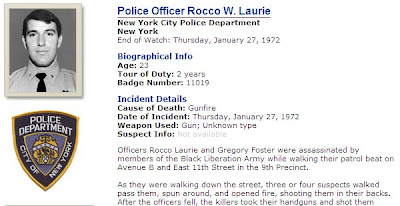 OFC. ROCCO LAURIE - NYPD (Shot)
All these years later I tremble at [Black Panther chief Fred Hampton's] murder, as I trembled then. I trembled with rage, it’s true, and fear. I trembled with uncertainty: What could we do to survive? How could we help the remaining Panthers? How would the movement move forward? 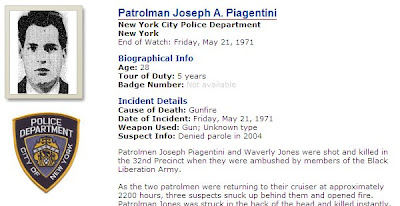 OFC. JOE PIAGENTINI - NYPD (Shot)
The US government, though, learned some serious lessons from those times, lessons they’ve implemented ferociously ever since. It abolished the citizen army, for example... 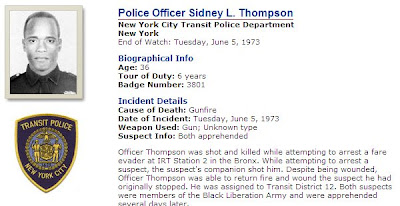 OFC. SIDNEY THOMPSON - NYTPD (Shot)
What percentage of the world’s energy resources are consumed in the US? 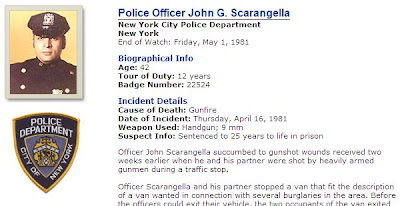 OFC. JOHN G. SCARANGELLA - NYPD (Shot)
Still I’m disinclined to apologize because I hear the demand for a general apology as a howling mob with an impossibly broad demand, and on top of that I’m not sure what exactly I’d apologize for. The ’68 Convention? The Days of Rage? Bombing the Pentagon? Every one of these can be unpacked and found to be a complicated mix of good and bad choices, noble and low motives. 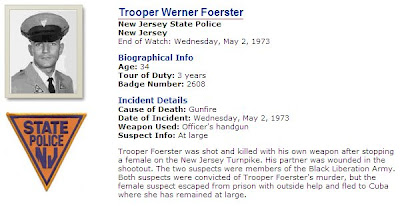 TROOPER WERNER FOERSTER - NJ STATE POLICE (Shot)
I still refuse to grow up if the price is to falsely confess a sin I don’t take to be a sin. 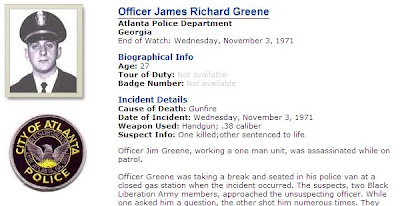 OFC. JAMES GREENE - ATLANTA PD (Shot)
I don’t regret escalating the fight against racism, white supremacy, and U.S. imperialism—still the biggest threat to a world at peace and in balance. I’m sorry we weren’t as effective as we might have been, and sorry we didn’t do more to stop the murder. 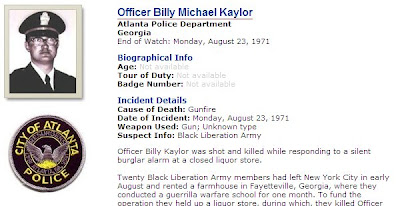 OFC. BILLY KAYLOR - ATLANTA PD (Shot)
We fight against the obstacles. U.S. war and expansion in Iraq, for example, or Israel’s insistence on its right to slowly annihilate the Palestinian people, or the caging and disenfranchisement of Black men. 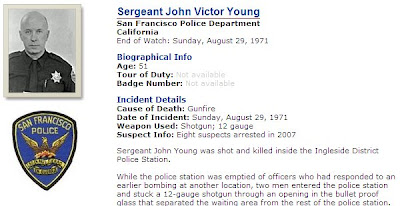 SGT. JOHN YOUNG - SFPD (Shot)
Be with the despised. Unite with the outcast. Act and then doubt. And then act. 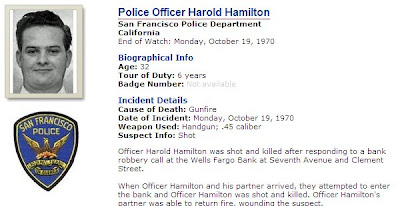 OFC. HAROLD HAMILTON - SFPD (Shot)
Toward the end of the summer of 2005, outside President Bush’s ranch in Crawford, Texas, I joined the encampment known as Camp Casey. Crawford is a town divided: the brightly decorated Peace House faces banners reading, “All the way Mr. President” and “Smoke ‘Em Out, 43”; one side of the road has lawn signs with the iconic image of Marines planting the flag on Iwo Jima and the slogan “Support Our Troops,”—somewhat desperate, I thought, to have to reach so far back for a picture of putative pride in war...

CHARGES AGAINST AYERS WERE DROPPED AND HE SERVED NO TIME

Ayers "Served No Time." "William Ayers: Surrendered and pleaded guilty in 1980 to possession of explosives and served no time. Teaches early childhood development at the University of Illinois." [Boston Globe, 9/19/93]

Even though Ayers admitted his crimes, the Government's case was thrown out due to -- yes, you guessed it -- illegal wiretaps.

Back in August Punditarian, writing at The Astute Bloggers, put it succinctly:

Prediction: the evidence will show that the electoral career of Barack Obama was launched by Bill Ayers like a missile at the heart of America because he was convinced that Obama shared his Marxist-Leninist outlook. Perhaps Obama was fooling him, as he has fooled so many others. But perhaps that is the real skeleton in the closet where hangs the empty suit.

Just who in the hell is Barack Obama? And who sent him?
Knowing that question won't be answered, Andrew C. McCarthy writes the executive summary.

In short, Bill Ayers and Barack Obama moved in the same circles, were driven by the same cause, and admired the same radicals all the way from Morningside Heights to Hyde Park. They ended up publicly admiring each other, promoting each other’s work, sitting on the same boards, and funding the same Leftist agitators.

You could conclude, as I do, that it all goes back to a formative time in his life that Obama refuses to discuss. Or you could buy the fairy tale that Bill Ayers first encountered an unknown, inexperienced, third-year associate from a small Chicago law-firm over coffee in 1995 and suddenly decided Barack Obama was the perfect fit to oversee the $150 million pot of gold Ayers hoped would underwrite his revolution.

Update: Victor Davis Hanson: ""He [Obama] said they have not spoken by phone or exchanged e-mail messages since Mr. Obama began serving in the United States Senate in January 2005" (New York Times, 10/3) ...Why in the world was Barack Obama still communicating on the phone or via email with Bill Ayers up until 2005?"