Gateway Pundit highlights the NRA's bunker-buster of an ad:

"Imagine your child screaming in the middle of the night when a convicted felon breaks into your home," the narrator says. "Worse, he comes back a second time. You use a firearm to defend yourself and your family. Unbelievably, Obama voted to make you the criminal..." 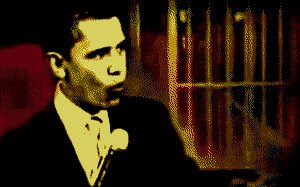 It goes on from there.

The ad refers to a 2003 incident when a Wilmette, Ill., restaurateur named Hale DeMar shot and wounded a burglar who broke into his house. DeMar was prosecuted by the town of Wilmette, which had, at the time, a ban on the possession of handguns, so some Illinois lawmakers introduced legislation to offer legal protections to individuals who use firearms in self-defense. The bill passed the Illinois state House by a vote of 86-25, and the Illinois state Senate -- where Obama voted against it -- by a vote of 39-20.