RedState has the update: 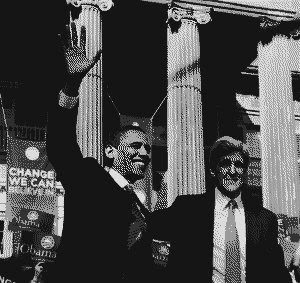 California has begun early voting already as well as mail-in balloting. The number of people who have gone in to vote in person has been extensive. The results so far prove what we had always suspected. The polls are being proven as totally unreliable. Although the results of early balloting have not been disclosed,of course, how many Republicans and how many Democrats have voted has been revealed.

The results are simply shocking. The polls showed Barack Obama with an 18 point lead in California just a few days ago. The results thus far are the complete opposite. In the most liberal state in the entire country,the results are that 99,000 Republicans have voted and 96,000 Democrats voted. In the mail-in balloting the results so far are that 9,000 Democrats sent in their ballots and that 5,000 Republicans did so. So with nearly 210,000 people having voted, the Democrats have only a 1,000 vote advantage!

If we take the liberty of assuming that all Republicans will vote for John McCain and all Democrats will vote for Obama, then the race is incredibly close. I'm sure that Obama will eventually win in California, but if he is struggling here after he pushed so hard for early voting, then he will lose the election ! Everybody thought he would win California in a landslide, but so far anyway, it's very tight. That means that in the less liberal states he is in real trouble.

Ignore the pundits. Forget the polls. Get out there and vote for John McCain. The results in California show the wisdom of Yogi Berra who said, "It's not over until it's over."

In retrospect, perhaps this isn't as much of a story as it might first appear. If the last presidential exit polls were to be believed, President Windsurfer Von Kerry would just be wrapping up his first term.

Update: AJ Strata says that this is actually the "Third Early Voting Indicator National Polls May Be Way Off."

Linked by: American Digest. Thanks!
at 9:18 PM
Email ThisBlogThis!Share to TwitterShare to FacebookShare to Pinterest
Labels: Democrats, McCain, Obama