RED ALERT: OBAMA SIGNED UP WITH DEMOCRATIC SOCIALIST PARTY IN '95!


Where's a frickin' flaming skull when ya need one? 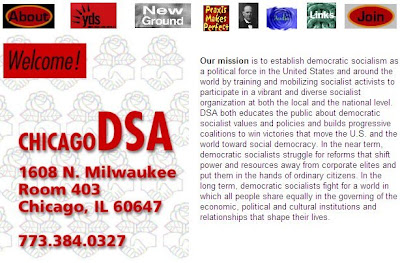 In 1995 Obama signed a contract with the DSA "promising a more open relationship with the Marxist New Party".

About 50 activists attended the Chicago New Party membership meeting in July. The purpose of the meeting was to update members on local activities and to hear appeals for NP support from four potential political candidates.

The mission statement of the Chicago Democratic Socialists of America?

Our mission is to establish democratic socialism as a political force in the United States and around the world by training and mobilizing socialist activists to participate in a vibrant and diverse socialist organization at both the local and the national level. DSA both educates the public about democratic socialist values and policies and builds progressive coalitions to win victories that move the U.S. and the world toward social democracy... In the long term, democratic socialists fight for a world in which all people share equally in the governing of the economic, political and cultural institutions and relationships that shape their lives.

Eh, sure. Because Communism worked out so well for the Soviets and Cubans.

The Jawa Report notes that the DSA founded the New Party:

The 'New Party' was a political party established by the Democratic Socialists of America (the DSA) to push forth the socialist principles of the DSA by focusing on winnable elections at a local level and spreading the Socialist movement upwards...

...the NP's '96 Political Program has been enormously successful with 3 of 4 endorsed candidates winning electoral primaries. All four candidates attended the NP membership meeting on April 11th to express their gratitude... Barack Obama, victor in the 13th State Senate District, encouraged NPers to join in his task forces on Voter Education and Voter Registration.

Obama is not simply an ultra-liberal. He is a Marxist. He campaigned on the Socialist ticket, signed the Socialist contract, and attended Socialist meetings.

I'll ask it again: just who in the hell is Barack Obama? And who sent him?