Your Tax Dollars At Work: 'Professor' Rallies Students for an Armed Revolt Against 'Occupied Mexico', eh, I mean the United States of America

Have you seen this UCLA "professor", captured on tape inciting students to overthrow the U.S. government in pursuit of a master race? [Update -- better yet, this gentleman is reportedly a high school teacher who happened to be rallying his troops at UCLA when caught on camera. See below for details]

I want to start by saying that the young man who spoke a little while ago is one of my students! Our people will need strong leaders for years and years to come. (applause)

As a Revolutionary Mexican Organization here, we understand... it's not just about Mexico, it's about the global struggle against imperialism and capitalism! (applause) 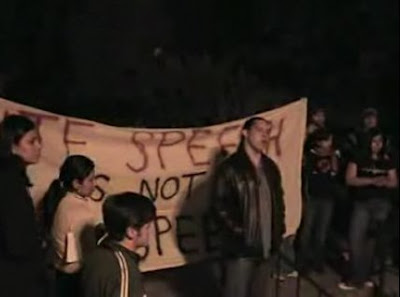 We know that all of that is happening in the context of where we now stand is stolen, occupied Mexico! (applause)

The message that we bring is that we want to bring more of a revolutionary context to this. Why is that these people... these frail, racist white people want to keep us out of this country? It's not simply because the color of our skin, it's not simply that they just want to exploit us, let me tell you why: because on this planet right now, six billion people... at the forefront of the movement is La Raza (the race)...

...We have nine... nine... governments right now and they know something that a young Argentine named Che Guevara said... it was called the domino theory... and he knew that every single country would launch revolutionaries one after the other after the other! 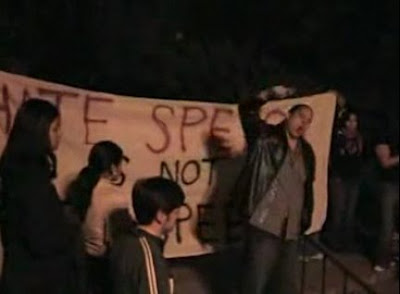 So what do they fear? They know that every single country... they know that we no longer fall to these lies called borders... they know that the Salvadorans, the Guatemaleans, the Ecuadoreans, the Mexicanos, there's no damn difference, we are all one people. So with that in mind, we see ourselves -- all of us here -- as The Northern Front of a Latin American Revolutionary Movement!

There are over 40 million of our people north of the Rio Grande. That means to them there are over 40 million potential revolutionaries north of the border! Inside the belly of the beast! So when you think why do they want to kick us, our people, out -- that's why! Because they know that we now know the truth, they know we are La Raza, we are professionals, we are educators, we are revolutionary students, what does that mean?

We are not just a regular culture any more! We are a culture of revolutionary spirit! And that's the fear! (applause) 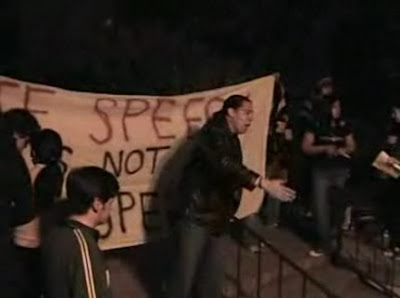 These people luxuriate in the most magnificent society ever created and they use the comforts, the wealth, the capital they accumulate to undermine the very structure that enriches them.

I don't see any "militias" preaching the subversion and overthrow of the U.S. government -- I see left-wing crackpots like this Hitler-wannabe doing so. But, please, no one tell the media or Janet Incompetano. We wouldn't want to spring any surprises on them, what with SUV's smoldering in Times Square and all.

It's time to start prosecuting, convicting and imprisoning people like this for sedition, treason, you name it. Just listen to the tape and tell me you don't hear Adolf Hitler, circa 1933, screeching about a master race.


Update: At Gather, this nutcase is reported to be Sanchee H.S. history teacher Ron Gochez at a La Raza Rally held at UCLA. Contact information is available at the link. You can also rate Ron Gochez' teaching performance if you wish.

Update II: Here's the loathsome Gochez threatening to go on a hunger strike (because of budget cuts). 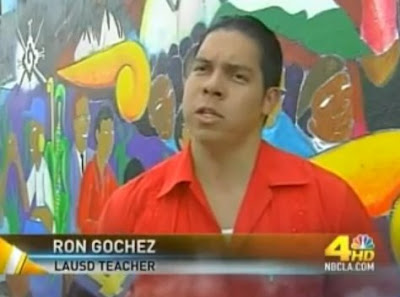 ...the guy's a rabid anti-Semite. In 2002, he published a Letter to the Editor, at SDSU's Daily Aztec, entitled "The Jewish-owned media continue to blind the masses with propaganda to keep them in fear." The letter's been taken down, but not the responses to it. For example, here's Tevia Schriebman, Jewish Student Union President:

I am writing in response to Ron Gochez's letter to the editor. His empty words are filled with racist remarks and lies. As the President of the Jewish Student Union at SDSU, I take personal offense at his comments and beliefs that "Jewish-owned media continues to blind the masses with propaganda to keep them in fear." This lie is the language of hate speech perpetuated by anti-Semitic groups such as the Ku Klux Klan.

And check the link. Schriebman's not alone in denouncing Gochez's racist bigotry.

And it's not as if Ron Gochez's anti-Jewish diatribes were a matter of youthful indiscretion. He's cited as the lead organizer and contact person for an event in January 2009, "Raza in Solidarity with Palestine - Saturday, January 17th, 6:00 PM to 8:00 PM - At Centro Cultural Francisco Villa - 2100 Maple Ave. LA - END the OCCUPATION NOW!

at 12:09 AM
Email ThisBlogThis!Share to TwitterShare to FacebookShare to Pinterest
Labels: Crime, Democrats, extremism

Ron Gochez is NOT a professor at UCLA. Gochez is currently a HISTORY teacher at Santee H.S. in Los Angeles.
Addresses & Phone numbers:
http://www.gather.com/viewArticle.action?articleId=281474978225116

I sincerely hope that Mr Ron Gomez will soon be an UNEMPLOYED high school teacher. What a reprehensible loon.