What is a Scandal? An illustrated primer for budding journalists 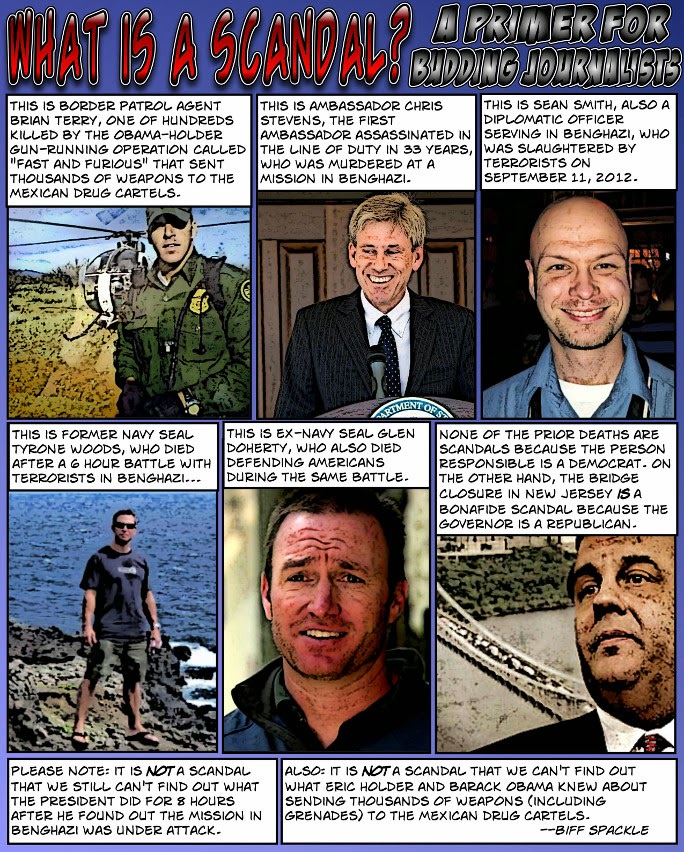 These people are sick.

part of the big problem here is that for 4 years most of the gop - especially gop'er like christie - have been soft on obama and allowed the real scandals to be swept under the rug. if the gop had been talking scadal everyday - talking about f&f and benghazi and the irs and the nbpp and so on - then more people would be angry with obma and ignore christie's fort lee/gwb scandal. i know: the media wasn't going to play ball with the gop, but it wouldn't have mattered had the gop - speaker boehner and mcconnell and romney - never let a dy go by without at least one of them demanding answers.
and the governors could have backed them up. iow: the christie scandal is damaging only because the gop has failed up to knpw to make obama's scandals stick. we need select committees and we need them now.

Didn't Obama refer to the deaths in Benghazi as "bumps in the road"? A traffic cone is far more severe than a speed bump!

Hillary Clinton deserves honorable mention regarding her part in the gun running scandal Project Fast and Furious. Her state department has the sole authority to grant the transport and import/export of arms across international borders.

She was also one of the main vocal proponents of the narrative 90% of guns involved in drug cartel violence originated from legitimate gun stores in the United States. To "substantiate" this lie Hillary Clinton and Eric Holder who both have the power to dictate what the BATF does in regards to arms control used the BATF to use paid straw purchasers to buy guns from border state gun dealers and smuggle those arms to Mexican drug cartels. There is evidence this was also done with US based gangs in various US cities, down in Honduras, and to Syrian rebels through the Benghazi embassy.

Ask Vince Foster about the blood and murder on Hillary Clinton's hands she is responsible for.

I would wager much this but the tip of the mountain of misery and murder she has had a hand in.

All the hallmarks of a psychopath.
If she becomes President we are going to look at the obama regime as the good ole days.

Christie is on the right and thus the real reason for this fascist feeding frenzy by the leftist MSM.