Winston Churchill has a message for each and every progressive 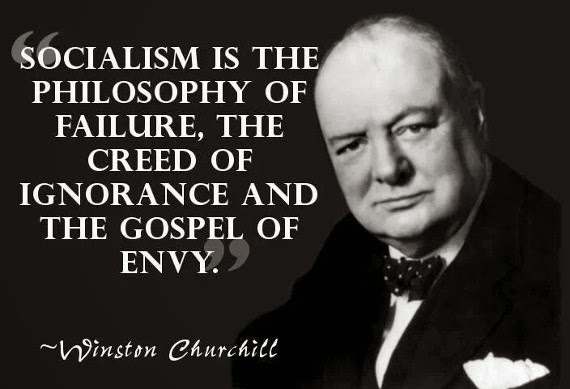 Also: "The Failure of 'Progressive' Big Government to Generate Economic Growth in One Easy-to-Read Chart."

Great Britain adopted socialized medicine in 1948, with the creation of the National Health Service (NHS). The political rhetoric in Britain exhorting the adoption of nationalized health insurance is similar to what we are hearing in the U.S. today. In 1942, Prime Minister Winston Churchill declared:

>>
The discoveries of healing science must be the inheritance of all . . . . Disease must be attacked whether it occurs in the poorest or the richest man or woman, simply on the ground that it is the enemy . . . . Our policy is to create a national health service, in order to secure that everybody in the country, irrespective of means, age, sex, or occupation, shall have equal opportunities to benefit from the best and most up-to-date medical and allied services available.
<<

With the adoption of national health insurance, Labour Minister Dr. David Owen predicted, “We were going to finance everything, cure the nation and then spending would drop.” Unfortunately things didn’t work out exactly as planned.

Whenever Socialism is discussed without defining it, the conversation becomes an intellectual dead end.

It's devolves into a literal "Ad Hominem".