Fun Coincidence: Obama's State of the Union Speech Will Mark 1,000 Days Without Democrats Passing a Budget

For three years -- including two years with super-majority control of both houses of Congress -- Democrats have avoided passing a budget. Meanwhile, the House of Representatives passed the Paul Ryan budget within weeks of the GOP taking control in 2011. 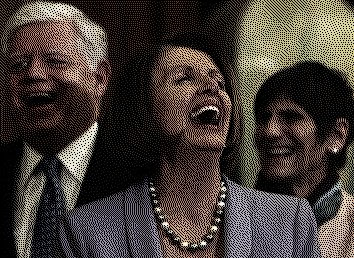 President Obama is sure to try to blame Republicans in both chambers for his administration’s failed economic policies. However, on the 1,000th day without a Democrat budget, the President will be forced to explain how anyone else is to blame; it is his party’s Senate leaders who have ignored their basic Congressional responsibility for almost three years...

A short look back on the fiscal recklessness of the last few years shows that if President Obama is upset about budget hostilities in Washington, he has no one to blame but himself. If he is serious about fixing the ailing economy, the President should demand Senate Democrats get back to work:

• 0: Number of Senate votes taken on the massive Democrat spending package crafted last year in place of an actual budget.
• 0: Number of votes the President’s FY 2012 budget received in the Senate.
• 0: Senate Budget Committee budget mark-ups scheduled last year.
• 3: Number of years the deficit has topped $1 Trillion.
• 3: Number of years total government spending has exceeded $3 Trillion.
• 34: number of months unemployment has been above 8 percent, the jobless rate the “stimulus” was supposed to prevent.
• 1.4 million: number of jobs killed by President Obama
• $16.4 Trillion: amount of debt held by the nation after three years of the Obama-Pelosi-Reid spending binge.

When President Obama blames a "do nothing" Congress, perhaps he should lean over and wink at Harry Reid, who has intentionally avoided passage of a budget for three consecutive years, an act of fiscal irresponsibility without parallel in modern American history.

Do you think we can convince Allen West or Joe Walsh to carry a homemade sign into the chamber? ;)

THE STIMULUS WAS THE VERY FIRST ORDER OF BUSINESS IN THE OBAMA WHITE HOUSE.

THE STIMULUS WAS THE BIGGEST MOST WASTEFUL MOST LARDED UP BOONDOGGLES IN US HISTORY - AND IT FAILED MISERABLY TO ACHIEVE ITS STATED GOALS.

EMPHASIS ON "STATED" - BECAUSE THE REAL GOALS WERE NOT THE STATED ONES. THE REAL GOAL WAS TO FUNNEL TAXPAYER MONEY TO THE MACHINE - AND THEN LOCK IT IN FOR YEARS TO COME.

HOW WOULD THEY LOCK IT IN? SIMPLE: JUST DON'T PASS A REAL BUDGET.

CUNNING PLAN. SO FAR IT HAS WORKED.

MITT ROMNEY OUGHT TO MAKE TWO NEW PROMISES - AND HE SHOULD MAKE THEM A CENTRAL PART OF HIS CAMPAIGN:

OBAMA CANNOT HAVE A COMEBACK POSITION ON THIS.

WHEN THE DEMOCRATS CONTROLLED CONGRESS THEY NEVER PASSED A BUDGET.

KNOW YOU KNOW WHY.

Do you think Romney's unwillingness to release his tax returns is related to the rumors he is not a U.S. citizen?

ROMNEY WILL RELEASE ALL FINANCIAL DATA REQUIRED BY LAW

It's law to follow all provisions of the Constitution. If Romney isn't hiding anything, he should do the same thing every CANDIDATE has done since the 1960's - release his tax returns.

the law is they have to fill out financial disclosure forms.

And Romney not releasing his tax records (did Kerry???) has WHAT TO DO WITH THE DEMOCRAT SENATE NOT PASSING A BUDGET?

What a slavish drone troll

Your mention of Kerry leads me to presume you think I lean left. If so, not true. I am simply not into socialism. Romney, Newt, Huntsman, Perry, et al, are all socialists.

If I understand you correctly, you are saying two things:

First, as long as Romney complies with the law during the election, he doesn't need to comply with the Constitution by being a natural born citizen, which is also the law of the land.

And, as long as Romney can deceive people long enough to be elected, assuming he isn't qualified, then toughsky shitsky after he is elected. And, if so, under Mormonism, then there must not be a moral or spiritual obligation to comply with the Constitution, huh?

Mormons, and socialist RINOs, consider contempt as an attribute, huh?