Did I say "Tea Party Activists"? Because I meant to say "Democrat-supported Occupy Loons."

Occupy Oakland protesters broke into City Hall, stole an American flag from the council chamber and set it afire Saturday night punctuating a wild day on the streets of the East Bay city in which police deployed tear gas, arrested more than 100 marchers and dodged hurling objects... Demonstrators spent the day trying to break into a convention center, and temporarily occupying City Hall and a YMCA, all while snaking around lines of riot-clad police. 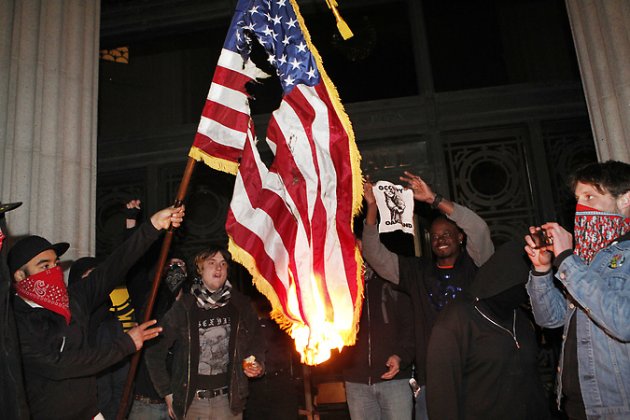 300 of the Tea Party activists Occupy Oakland Leftists were arrested according to The Los Angeles Times.

...About 300 people were arrested Saturday during a chaotic day of Occupy protests that saw demonstrators break into City Hall and burn an American flag, as police earlier fired tear gas and bean bags to disperse hundreds of people after some threw rocks and bottles and tore down fencing outside a nearby convention center. 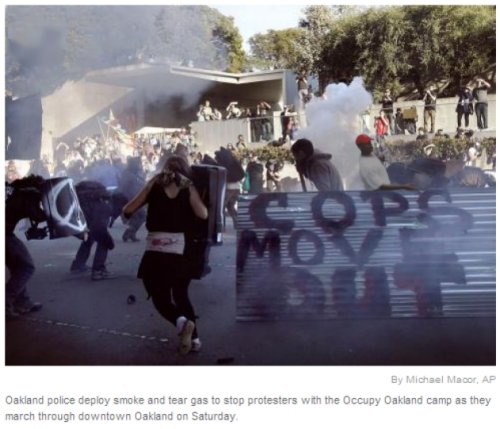 ...Dozens of police officers remained on guard outside City Hall around midnight following the most turbulent day of protests since November, when Oakland police forcefully dismantled an Occupy encampment. An exasperated Mayor Jean Quan, who faced heavy criticism for the police action last fall, called on the Occupy movement to "stop using Oakland as its playground."

...Quan said that at one point, many forced their way into City Hall, where they burned flags, broke an electrical box and damaged several art structures, including a recycled art exhibit created by children.

Curiously, the media has failed to connect this violence with the explicit endorsements of the movement by President Obama.

Pity that the jackasses didn't set themselves on fire.

If these guys are so courageous and proud of what they do, why do so many of them wear masks?

I don't remember anyone wearing a mask at any of the Tea Part rallies I attended.

Hey Anonymous Occupier, can fully understand that you lot are mostly paulbots, except for you of course, you are neither a democrat nor a paulbot, and you sure as hell are not a conservative. Sadly, the democrats identify with you the most, which is not so hard to believe.

They should have burned the yellow fringe off the flag and put it back.