But remember, folks: the border "is as safe as it's ever been" (in the words of DHS Chief Janet Napolitano). Except for those pesky beheadings here in the U.S.: 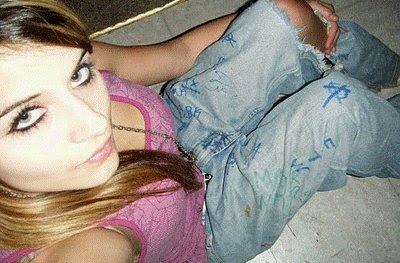 Who: Carina Saunders, 19, born in Oklahoma City and grew up in Mustang, Oklahoma.

What: Torture, beheading and dismemberment.

Where: Found in a duffle bag behind a Homeland grocery store at 7101 NW. 23rd and Rockwell in Bethany, Oklahoma.

Why: Used as an example to terrify a group of women who were victims of a human trafficking (prostitution) ring and an associated drug trafficking ring. Note— some of the individuals involved were members of both rings.

Tactical Analysis: A 20 year old woman (name withheld by the police to protect her identity) was kidnapped, blindfolded and transported to an unknown location (some type of room) by Jimmy Lee Massey, age 33, late Sunday 9 October/early Monday 10 October 2011. She was then forced to watch the torture killing of Carina Saunders by a small group of individuals.

Three beheadings in two different states and they happened here in the United States, not Mexico. Former DEA supervisor Phil Jordan says all three beheadings have cartel written all over them. They happened in Arizona and Oklahoma in the past year.

A murder mystery is now unraveling on a stretch of North Reservation Road in Tucson, Ariz. County workers found a headless man lying on the side of the road Jan. 6. The man's hands and feet were reportedly missing, too.

"It would lead me to believe the message wanted to be sent. This is one of the ways they do it in Mexico, Colombia and other places," says Jordan... Jordan says the cartels are getting bolder in carrying out their beheadings across the border. He says we only used to see these crimes in Mexico.

...More than 600 miles from the border, a 19-year-old human trafficking victim was found beheaded in Oklahoma. Carina Saunders was stuffed into a bag and left in a grocery store parking lot.

"One is too many; two is too many. Three should send an alarm," says Jordan.

You know what I would do if I were Attorney General Eric Holder?

That's right -- I'd sue states for enforcing federal immigration law. No matter how many murders, kidnappings, rapes, drug- and human smuggling operations, and related violence that American citizens must suffer.

Does the DoJ believe individual body parts can vote..well maybe, if they're all registered as D's for dead and Democrat.

Sad...very sad. She is an analogy of this Nation. I don't know what it will take to wake up America.

Cartels? No. Silly rabbit, Bush did it.

I can only hope and pray that people rea;;y understand the importance of getting these corrupt people out of office this year. Otherwise, this country resembles a 3rd world country.

Thank you Feral government for destroying our nation. Many happy returns to you and yours.

7 Be not deceived; God is not mocked: for whatsoever a man soweth, that shall he also reap.

9 And let us not be weary in well doing: for in due season we shall reap, if we faint not.