[Obama's] scorn [for the Constitution] has been expressed most recently in his "recess" appointments of members of the National Labor Relations Board and the chairmanship of the Consumer Financial Protection Bureau. The quotation marks are appropriate because when he made the appointments the Senate was not in recess as the Constitution requires. 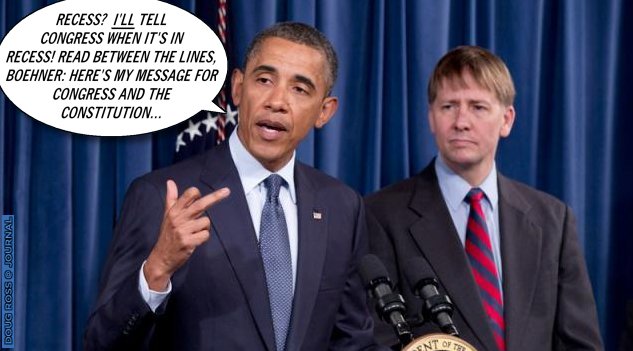 Article II, Section 2 of the Constitution says that presidential appointments must be confirmed by the Senate unless Congress provides otherwise. But anticipating that the government may need officials when the Senate is available, the section further provides that "The President shall have power to fill up all vacancies that may happen during the recess of the Senate, by granting commissions which shall expire at the end of the next session."

What constitutes a recess? Article I, Section 5 provides "Neither house, during the session of Congress, shall, without the consent of the other, adjourn for more than three days."

The House did not consent to the adjournment of the Senate this year, so there is no recess, and hence no constitutional authority to make recess appointments.

The White House has belatedly trotted out an opinion from the Justice Department's Office of Legal Counsel (headed by a political appointee) saying that the president was justified in considering the Senate in recess, because the sessions it was holding every three days were just pro forma or, in the words of Obama defenders, "gimmicks."

Factually this is flat wrong. At one of those sessions the Senate passed the payroll tax cut extension, an important piece of legislation. ...Can the president decide that the quality of Senate debate is so poor on any particular day that he may deem it to be in recess? ....Obama defied not only the Constitution, but Dodd-Frank, which explicitly states that the CFPB head can only take legal action after he is confirmed by the Senate. Presumably anyone aggrieved by one of his orders will sue and probably prevail.

...The Framers of the Constitution saw it a different way. When the Senate refuses to confirm a presidential appointee, that person does not take office. When the Senate is not in recess, the president cannot make a recess appointment.

The Framers thought it more important to limit power than for government to act quickly. Obama disagrees.

Barone ain't exactly a right-wing Visigoth, so I'm guessing this serves as a fine little warning shot to the most lawless administration since Warren G. Harding's Teapot Dome crew.

The constitution needs to be amended to completely eliminate recess appointments altogether. The recess appointment had utility in the 18th Century - you know, BEFORE planes, trains, and automobiles. (not the movie, the actual stuff)

great haircut on that guy, I didn't know that the "Moe" was back in style.

The Hawwian good luck salute has taken on an entirely new meaning.

But, I guess it must be because we are "so dumb" we can't figure it out that the won is dictator for life. That it entitles his majesty to decree anything his heart desires, and us bitter clingers really need to get with the program, or get a tingle down our leg.

Odds are the Liberal Democrat will begin foaming at the mouth and gibbering.