Contrary to rumor, the President and Democrats in Congress really do have a national security strategy. See if you can figure out what it is.

...President Obama and Secretary of Defense Leon Panetta have already settled on a plan to slash $487 billion from existing manpower, as well as from procurement and development of equipment and weapons. The cuts include reducing the Army by 72,000 people and the Marines by 20,000. The cuts also include elimination of six tactical fighter squadrons and one training squadron, plus buying fewer F-35 Joint Strike Fighters -- on top of already planned reductions in the number of F-22 air superiority fighters to be put in service. The Navy will decommission seven cruisers and two amphibious craft, plus delay its procurement process for new ships. Together, these moves will dramatically reduce our ability to put "boots on the ground" and to insure the air superiority needed to protect and assist U.S. forces in major conflicts. Having such forces at the ready is also the best way to keep minor conflicts from exploding into big ones. 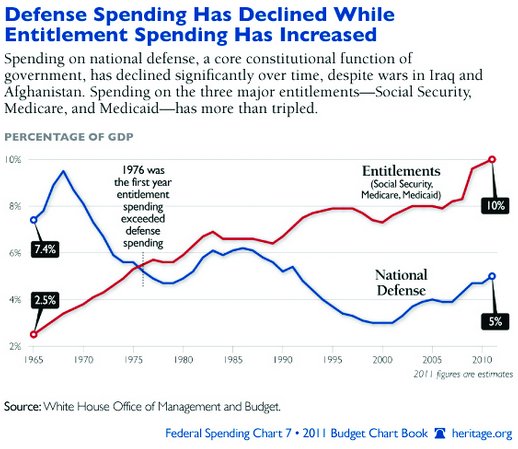 But the Obama-Panetta cuts aren't nearly enough for some in Congress. On Friday, representatives Barney Frank of Massachusetts, Barbara Lee and Lynn Woolsey of California, and Rush Holt of New Jersey wrote Obama to encourage him to "take even bolder leadership on this issue as you finalize your budget." They want Obama to double the Pentagon cuts because "the Cold War is long over, and no remotely comparable adversary has emerged or is likely to emerge. ... We believe that savings of around $900 billion over the next 10 years can be realized." Following their advice would greatly reduce the reach of American power, and make us seem like a paper lion to the bad guys of the world.

...The terrible irony here is that military spending has been on a steady decline since 1965, as seen in the nearby chart. And, as the defense portion of the budget has contracted for nearly five decades, entitlement spending has exploded... Obama, Panetta and their liberal Democrat allies like Frank are playing chicken with American security.

These are the mayor's people. She encouraged them. She deserves every minute of this. Perhaps next time the people of Oakland won't elect a dried up old hippie.