Ann Coulter is one of America's most talented conservative columnists. Of late, she has been curiously dogged in attacking Newt Gingrich -- unquestionably a captain of the "Reagan Revolution" -- while backing a man whose conservative credentials are dicey at best. Today Gingrich fired back. 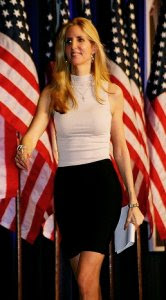 Fox News Latino’s Victor Garcia did a phone interview with Newt Gingrich. During which the Former Speaker was asked about the recent Ann Coulter and Tom Delay criticisms...

Victor Garcia: You have been taking a lot of hits from Tom Delay now, Ann Coulter some of these people that some would consider on the far right of the conservative spectrum. What is your response to the criticism of those ones? Why do you think they are attacking you?

Newt Gingrich: Look I think there are a whole bunch of folks who represent the old order; they attacked Ronald Reagan in 1980 exactly the same way. They are looking at a national poll that shows me ahead of Romney 52-39 in a two way race and they are recognizing that if I come back as president, that I will be for very dramatic, very bold change and they are terrified. I have no interest in what Tom Delay did that got him in trouble. I thought it was wrong and a mistake, I have a very different approach to that and I have no Idea what motivates Ann Coulter but I find that she is all over the map. Basically she is for Romney and therefore anything she says about me is a reflection of the fact that she is for Romney. I expect people who are for Romney to attack me because they are terrified because he is losing.

I have no problem whatsoever with Coulter voicing her opinion, but she should -- like Karl Rove -- disclose whether any financial interests are playing a part in her support for Romney.

at 8:37 PM
Email ThisBlogThis!Share to TwitterShare to FacebookShare to Pinterest
Labels: MSM, Romney

I don't recollect Ann's breasts being as large as pictured, closer examination is needed.
Anyway, I lump Ann into the same sack of cloth with Peggy Noonan - brilliant for a moment but flickering ineffectively for hard travel. Please send replacement bulbs.

You assume that Coulter's being paid and you demand she admit it. What if there's nothing to admit? It's like the liberals who said that Herman Cain needed to just admit the sexual harassment allegations were true. I for one like Newt, but I also like Mitt, and I LOVE Ann. Just so you know where I'm coming from.

@LB - I hear ya, but at the same time, I'm not ripping Mitt Romney on national television like her and Rove.

Word on the street is that certain pundits were paid off the fabulously wealthy Romney crowd. It would be great if all pundits -- on the left and right -- disclosed any affiliations. That goes as much for the crackpots like Kos as much as it does Coulter.

I get paid bupkis by any of the candidates -- and simply speak from the heart.

First Ann was gaga over Christie, now it's Romney. The odd thing is how strident she is about it, and how aggressively she goes after Newt.

I used to have a lot of respect for Ann, but found her love for chris "crispy creme' christie disturbing. Who knows, maybe she's simply a chubby chaser or something....? Now she's all over Mitt for brains, I am done with her. Bye bye Ann, it was fun while you lasted.

George Soros says he wants Romney to be the Republican Candidate because there isn’t much difference between Romney and Obama. Jan 25, 2012