Before we worry about Mitt Romney's tax rate, perhaps we could get Obama's henchmen to pay their taxes

I don't know why the White House keeps talking about Mitt Romney's tax return or the fact that Warren Buffett's secretary can't buy a third home in a golf community.

Turns out that Obama's staff includes a whole posse of tax scofflaws (and we're not even counting the guys we knew about like Turbotax Tim Geithner): 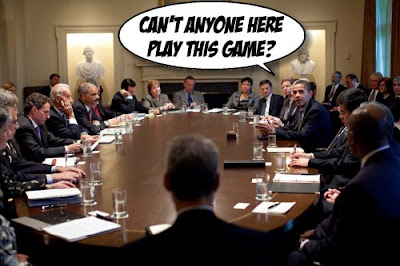 How embarrassing this must be for President Obama, whose major speech theme so far this campaign season has been that every single American, no matter how rich, should pay their "fair share" of taxes.

A new report just out from the Internal Revenue Service reveals that 36 of President Obama's executive office staff owe the country $833,970 in back taxes. These people working for Mr. Fair Share apparently haven't paid any share, let alone their fair share.

...Nearly one-third of Obama's aides make more than $100,000 with 21 being paid the top White House salary of $172,200, each... The IRS' 2010 delinquent tax revelations come as part of a required annual agency report on federal employees' tax compliance. Turns out, an awful lot of folks being paid by taxpayers are not paying their own income taxes.

The report finds that thousands of federal employees owe the country more than $3.4 billion in back taxes. That's up 3% in the past year.

...The Treasury Department, where Obama nominee Tim Geithner had to pay up $42,000 in his own back taxes before being confirmed as secretary, has 1,181 other employees with delinquent taxes totaling $9.3 million... [and] the Energy Department that was so quick to dish out more than $500 million to the Solyndra folks has 322 employees owing $5 million.

The country's chief law enforcement agency, the Department of Justice, has 2,069 employees who are nearly $17 million behind in taxes. Like Operation Fast and Furious, Attorney General Eric Holder has apparently missed them too.

More hypocrisy from the Downgrade Administration.