Exclusive Photo: Prepping Your Garage For a Chevy Volt

If asbestos is still legal, I recommend plenty of it.

Electric cars might save you money at the pump, but they sure don’t save you time filling up. A typical electric car... takes upwards of 20 hours to recharge a fully drained battery when using an standard 120-volt outlet. While this might not be a problem for those looking to buy a second car for occasional outings, it certainly won’t cut it if an electric car is meant to be your primary vehicle. 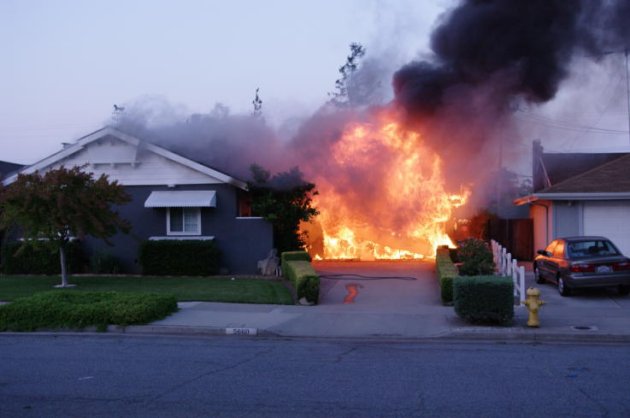 In order to achieve a quicker charge, you’ll need to hire an electrician to install a 240-volt, 40-amp line that connects directly to the circuit breaker, a hookup similar to the one you might have for an electric oven or clothes dryer. With the increase in voltage, you can cut your charging time down to seven hours for a Nissan LEAF and four hours for the Chevy Volt, which means an overnight charge makes it a more practical purchase for daily use.

Super-fast charging stations capable of pumping out 480 volts are already on the market, and can recharge a car in 30 minutes or less. But these souped-up charging stations are currently for commercial use only because most homes can’t handle the kind of voltage and amperage required, at least not without some major rewiring of the power grid.

In related news, the federal government has decided to close its investigation of Volt fires.

The U.S. government on Friday closed its investigation of Chevy Volt battery fires, concluding that there is no apparent defect trend and that electric vehicles generally do not pose a greater risk of fire than gasoline-powered vehicles.

Of course not. All of those modifications GM had to make were just for show.

There's nothing to be concerned about. Just go about your business.

so how much does it cost in coal energy to power the stupid thing for how long. People need to know how worthLESS the thing is.

Barf Orama is a failure...just like his favorite car. But no worries, he's not done wasting our money yet. He has 9 more months to party on our dime, wasting money on more stupid ideas, paying off his cronies, and taking lavish vacations.