Jim Pethokoukis alerts us to the stunning release of a confidential memo sent to Barack Obama by senior economic adviser Larry Summers on December 15, 2008.

In short, Obama and Summers both knew the Stimulus was a scam. 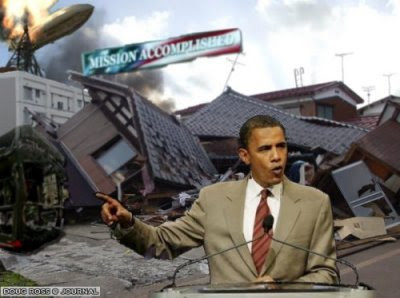 1. The Stimulus Had Nothing to Do With Reviving the Economy, It Was Designed To Reward Allies and Implement Left-Wing Policies - "The short-run economic imperative was to identify as many campaign promises or high priority items that would spend out quickly and be inherently temporary. … The stimulus package is a key tool for advancing clean energy goals and fulfilling a number of campaign commitments."

2. Obama knew that the deficits he was about to run were dangerous -- and didn't care - "[The spending] would leave an average deficit over the next decade that would be worse than any post-World War II decade. This would be entirely unsustainable and could cause serious economic problems in the both the short run and the long run."

3. Obama considered a Stimulus package greater than a trillion dollars, but was dissuaded when convinced the markets would rebel - "To accomplish a more significant reduction in the output gap would require stimulus of well over $1 trillion based on purely mechanical assumptions—which would likely not accomplish the goal because of the impact it would have on markets."

4. The Federal Reserve supported the disastrous Stimulus package - "Senior Federal Reserve officials appear to be of the view that a plan that well exceeds $600 billion would be desirable."

5. Obama knew the financial crisis was not solely Wall Street's fault - "A significant cause of the current crisis lies in the failure of regulators to exercise vigorously the authority they already have."

The revelations in this document alone should be enough to bring down the Obama administration. The level of dishonesty laced throughout the Obama White House is both shocking and repellent.

This brings to light what most sensible people already knew. Its mainly those who drink the progressive Koolaid who won't believe this information. Somehow we need to inform the ignorant apolitical types too. Sometimes when irrefutable information like this comes to light the apolitical types will wake up to reality.

Dear Doug,
I read this and the previous items you have worked so diligently to produce and publish, and the scope of the disaster created by these people beggars the mind.
What monsters are these people?
How could these people do what they have done? So many be so insane, so many who have too much power, too much control on my and my fellow Americans prosperity and Liberty.
What are these people?
Who do they think they are?

I know one thing without doubt, what these people are doing, what they represent, is why our founders placed the 2nd Amendment second.
So a great American like yourself Doug could tell the truth.

Rush Limbaugh has said all along that the stimulus (Porkulus) is a Democratic slush fund.

Send this article to him and maybe he'll read it on the air today.

Google Ener1, Beacon Power, and Amonix... these are three more that I bet have some kind of ties to Obama's bundlers...