They're for the Common Man [Amalaur] 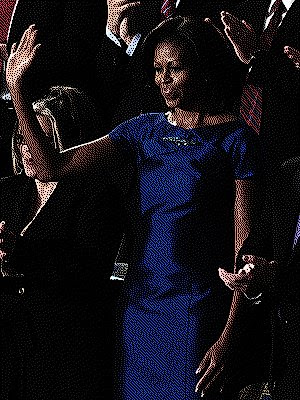 Last night’s State of the Union ensemble was no exception. As the President declared his intent to help buoy the 99 percent (“Asking a billionaire to pay at least as much as his secretary in taxes? Most Americans would call that common sense,” he declared), his wife dazzled in a cobalt sheath from Barbara Tfank’s resort collection.

While reps for the brand won’t reveal the item’s retail price, a similar style from the collection is currently available at Barneys New York for $2,400.

This isn’t the first time the First Lady has worn the Los Angeles-based designer’s sophisticated wares. Last year, she met with the Duke and Duchess of Cambridge wearing a seafoam brocade design topped with a bubblegum pink stole.

“Everything in my closet is something that I love,” Obama has said. “So that I can make choices based on what makes sense, knowing that I’m going to love whatever it is.”

I see another Target shopping trip in the near future for FLOTUS, with plenty of access for the press and especially photographers.