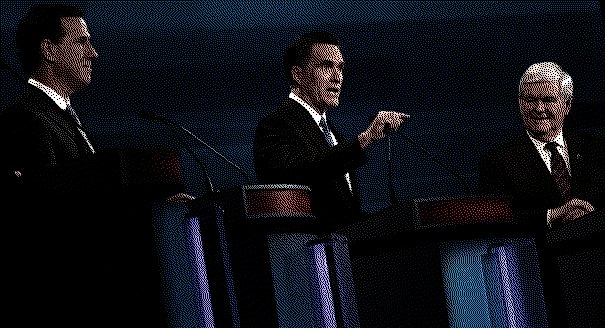 Erick Erickson describes these results as evidence that the GOP conservative base far outnumbers establishment RINOs -- and that the conservatives are pissed.

Newt Gingrich’s rise has a lot to do with Newt Gingrich’s debate performance. But it has just as much to do with a party base in revolt against its thought and party leaders in Washington, DC. The base is revolting because they swept the GOP back into relevance in Washington just under two years ago and they have been thanked with contempt ever since...

...Newt has taken the worst the media, Romney and the left can dish out, and he’s still standing and fighting with passion and eloquence. Sure, he’d probably be an erratic President, but right now Republican voters don’t care about his Presidency. They care about the fight with the left both Mitt Romney, and the Washington Republican leaders like John Boehner and Mitch McConnell don’t seem inclined to engage in.

I support Rick Santorum over Newt and Mitt. I support Newt over Mitt. And I support anyone over Barack Obama.

But Doug, you might ask, what about Ron Paul? What about him? Ron Paul is a kook, an anachronism, a Kucinich Libertarian wearing GOP clothes, whose views on foreign policy are so outside the mainstream that they can and must be dismissed.

Hugh"the field is set" Hewitt is on suicide watch.
MM

mitt trounced them by more in nh.

Newt will take Barry to the mat. In a general election contest, I don't see either Santorum or Romney letting both Obama and the media have it quite like Speaker Gingrich.

While we may be polar opposites in our favorites in this race(I'll take Newt over Rick any day), I think we both have the same opinion of Karl "the Assassin" Rove.

And the horse he rode in on.

I'll take Newt over Mitt-for-brains anyday if Santorum can't pull it off. At least we can expect Newt to take the lame stream media to the woodshed every time. Screw Mitt Romney, and Karl Rove, both Rinocrats.

Newt should pick Daniels or Pawlenty as VP, to show that he will have a stable anchor.

I think the lame stream media's attempt to destroy Newt in the last debate backfired on them big time when he beat the snot out of them. Maybe CNN will think twice next time they try to pick a candidate on their own.

Karl Rove was hoping for a Romney win. He wanted another job in the White House. With Newt as the front runner now, Rove's chances of getting that cushy White House job has gotten slimmer

YOU POSTED THIS, AND IT'S BEYOND SILLY:

The anti-establishment candidates -- Gingrich and Santorum

AND RICK? WHO ENDORSED ARLEN SPECTER!?!?!? AND WHO WAS PART OF THE SENATE LEADERSHIP, LITERALLY!?

THESE GUYS ARE [ART PF THE ESTABLISHMENT.

THIS KINE OF ATTACK IS WRONG AND SILLY AND BAD.

MITT IS A SELF-MADE MAN.

HE'S BEEN MORE CONSISTENTLY CONSERVATIVE THE LT 7 YEARS THAN EITHER NEWT OR RICK.

MITT WAS THE FIRST TO ENDORSE HALEY, AYOTTE, AND RUBIO.

PUHLEEEEEEEZE BASE YOUR DECISION ON WHO TO VOTE FOR ON FACTS, NOT BS.

MITT NEVER DID A TV COMMERCIAL WITH PELOSI.

MITT ALWAYS SUPPORTED RIGHT TO WORK LAWS - RICK DID NOT.

TO PAINT ONE OF THESE THREE GUYS AS A RINO IS CHILDISH BS.

NOBODY SHOULD FALL FOR IT.

I TRULY BELIEVE THAT MITT IS A MORE RELIABLE CONSERVATIVE AND RELIABLE LEADER WITH STEADIER MORE WELL THOUGHT OUT CONSERVATIVE POLICIES THAN NEWT OR RICK.

CALLING MITT THE ESTABLISHMENT RINO IS A SUBSTITUTE FOR CRITICAL THINKING.