It’s well known how in 1965 Daniel Patrick Moynihan, assistant secretary of labor to Democrat President Johnson, warned that the black family was on the verge of a “complete breakdown” because of growing illegitimacy rates: in 1963 the out-of-wedlock birth rate for whites was 3 percent, and for blacks it was 23.6 percent.

Moynihan was part of a generation of Democrats who cared about lifting blacks up into the ranks of equal opportunity with whites, back in the days before the Democrat Party became completely morally corrupt.

Then, as now, blacks represented only a small percentage of the U.S. population but a disproportionate percentage of people relying on public assistance. At the center of this “tangle of pathology,” as Moynihan called it, was “the weakness of the family structure” among blacks. “Once or twice removed, it will be found to be the principal source of most of the aberrant, inadequate, or antisocial behavior that did not establish, but now serves to perpetuate the cycle of poverty and deprivation.”

The majority of black babies are being born to single mothers—a prescription for a life of poverty and crime.

Ever since, the problem has only gotten worse...

The majority of black babies are being born to single mothers—a prescription for a life of poverty and crime. And despite the warnings that have sounded off loudly for over half a century, Democrats have done nothing to stop blacks, their most steadfast constituents, from having babies they can’t take care of. This problem has perpetuated itself for generations, producing generational poverty among blacks.

If black lives truly matter, as Democrats shout at the top of their lungs, why don’t they promulgate policies that encourage blacks to get married before they have kids?

Blacks’ voting overwhelmingly for Democrats over the past half century is the quintessential definition of political suicide. 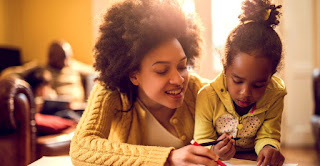 But what’s bad for blacks translates into a high rate of return on investment for Democrats. Marketing the “no baby daddy” syndrome to blacks has translated into votes, lots of votes, approaching 100 percent from blacks over the past half century. And the black family has been dismembered in the process, like the fetuses Planned Parenthood chops up to sell for profit. Democrats don’t quit while they’re ahead. No, the donkey party doubles down on evil.

In his 1992 acceptance speech for the Democrat presidential nomination, Bill Clinton declared, “Governments don’t raise children; parents do. And you should.”

Clinton meant to say, “If you’re white, I expect you to raise your kids”—because Democrats have made it their priority for society to normalize the idea that the federal government should be responsible for parenting blacks and their children. Neither Clinton nor any Democrat president since Johnson has done anything effective to ask black Americans as a race to take responsibility for raising our kids.

No greater or more glaring example of liberals’ profiting politically off of black people’s misery can be seen than the Democrats’ refusal to address the illegitimate birthrate spiraling out of control among blacks.

More black babies are born out of wedlock today (72 percent) than into married homes. That’s dramatically worse than when Moynihan initially raised the issue (when it was 23 percent)—thanks to fifty years of encouragement by the Democrat Party.

In other words, in America today, it is rare for black babies to be born to married parents. Black fathers are simply not part of the black family equation. Think about that.

Black fathers are simply not part of the black family equation. Think about that.

A few years ago, my mother tutored a four-year-old black girl in pre-K at a Richmond, Va. public school. It was part of an after-school program organized by her church’s outreach ministry. One afternoon in February, my mother was explaining to the little girl the meaning of Valentine’s Day’s. Helping the child make a card for her mother, my mother told her that she was going to give Valentine’s Day cards to special people like her husband and her children.

The little girl looked up at my mother in disbelief, asking, “You can have a husband?” Slightly shocked and a little taken aback, my mother simply responded, “Yes.”

It’s a sad state of affairs when the word husband is a foreign word to a little black girl.

A few weeks later, around Easter, the little girl asked my mother again, “Mrs. Wright, you have a husband?”

No, they certainly are not all the same. But the little girl probably had gone home and asked her single mother what a husband was, and her mother had told her that. It’s difficult to have a conversation with a four-year-old about the importance of marriage.

But the problem is that this little girl will grow up with her mother’s message that husbands are just the same as boyfriends. Based on the statistics, she will likely follow her mother’s bad example and have a baby out of wedlock.

Women having babies without fathers isn’t just a sign of the moral collapse of our culture, it’s hazardous to the child. When a child is born into a single-parent home, the chances of that child’s growing up in poverty are much greater.

According to a Brookings Institution study published in 2009, if a person graduates from high school, works a fulltime job, and waits until twenty-one to get married and have children, his or her chance of succeeding in life and becoming a member of the middle class rises to 76 percent. If a person doesn’t finish high school, doesn’t marry, and has a baby before the age of twenty-one, his or her chance of becoming poor soars to 74 percent.

One of the anti-poverty solutions the Brookings study recommended was for the federal government to advocate policies that strengthen families, such as programs “to reduce unplanned pregnancies for teens and twenty-somethings.”

The Brookings researchers seem to have understood that the breakdown of the black family has been the main driver of the chronic wealth gap between whites and blacks over the past five decades. The lack of intact families among blacks leads to a lack of education and jobs, which translates into higher rates of crime and government dependency among blacks. Eureka!

You don’t have to be a neurosurgeon to see that a child born to an unmarried teenage mother isn’t going to have a rosy future in life. The conclusions of the Brookings research are obvious, but Democrats continue to ignore the plain truth. Back in 1965, Moynihan was pelted with virulent criticism for telling the truth about black America.

Things have only gotten worse since then.