DRUNK ON POWER: GOPe senior official says that the insiders choose the nominee, not the voters

Someone really out to be handling public relations for these nutjobs

Interviewed on CNBC, Curly Haugland -- an unbound GOP delegate from North Carolina -- uttered some of the most outlandish and nefarious comments ever heard on national television regarding the GOP nomination. 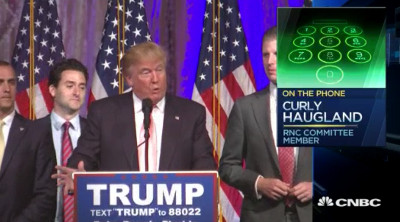 "The media has created the perception that the voters choose the nomination. That's the conflict here," Curly Haugland, an unbound GOP delegate from North Dakota, told CNBC's "Squawk Box" on Wednesday. He even questioned why primaries and caucuses are held...

...Most delegates bound by their state's primary or caucus results are only committed on the first ballot. If subsequent ballots are needed, virtually all of the delegates can vote any way they want, said Gary Emineth, another unbound delegate from North Dakota.

"It could introduce Paul Ryan, Mitt Romney, or it could be the other candidates that have already been in the race and are now out of the race [such as] Mike Huckabee [or] Rick Santorum. All those people could eventually become candidates on the floor," Emineth said.

House Speaker Paul Ryan, who decided not to run for the White House this year, said in a CNBC interview Tuesday he won't categorically rule out accepting the GOP nomination if a deadlocked convention were to turn to him. But on Wednesday, a Ryan spokeswoman said the speaker would not accept a Republican nomination for president at a divided convention...

...Emineth said he's worried that frustration would discourage Americans in the general election from voting Republican.

So let me be the 54,009th person to predict that if the GOP establishment tries to steal the nomination from Donald Trump or Ted Cruz, there will be a political upheaval unseen in this country since the Civil War.

they don't care .... the military and the police will do as they are told as happens in ALL places where the citizens are demoted to serfs ....... the Republic is almost toast with no real rescue in sight
the elimination of opposition has begun, the college campuses are the same as the punks behind mao's cultural revolution.
look at the destruction or removal of statues and renaming of places and buildings..... in schools history is being re written to fit the mold of a good serf

These politicians are out-of-control monsters. They have no morals, no soul and no integrity. Mitch McConnell, Paul Ryan, John Boehner, John Cornyn, Steny Hoyer, Chuck Schumer - nothing but power hungry sleazeballs who have sold out their country to the US Chamber of Commerce and other big money lobbyist campaign donors. And, THEY THINK WE CAN'T SEE IT!!! They will ignore us as long as we let them. It's going to take MORE than nasty letters and votes against them. It's going to take a march on D.C., the likes of which have never been seen before and for everyone to literally break into the senate/congress floor, their offices and literally THROW THEM out by the seat of their pants. It's going to take FORCE. They have forced their will on us for far too long - now it's time for us to FORCE THEM OUT.