There is new evidence senior Environmental Protection Agency (EPA) officials routinely use private email accounts to conduct government business, this time to pass along information from an energy lobbyist.

Michael J. Bradley, president and founder of an energy consulting firm that represents numerous green advocacy groups, described his preference for using a private email to communicate with EPA Administrator Gina McCarthy regarding an agency regulation, according to documents obtained by the Energy & Environment Legal Institute (E&E Legal) through a Freedom of Information Act request.

“Joe, Would you please send this email to Gina for me? I would have sent it to her directly with a cc to you but I don’t have a private email address for her and would prefer to not use an office email address,” Bradley emailed to EPA Senior Counsel Joe Goffman.

The rest of the email was addressed to “Gina” and regarded the Cross-State Pollution Rule, noting companies Bradley represents, according to E&E Legal, want to support the regulation. 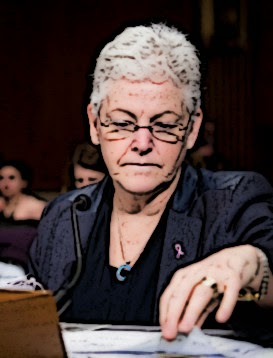 “Our goal is to have a rule implemented that is legally sound, gives the industry the needed business certainty for investments in cleaner generation, and addresses the air transport issues affecting many of the state in which the [Clean Energy Group] members operate,” Bradley wrote.

“We would not want to see the rule stayed,” he continued.

Melissa Harrison told The Daily Caller News Foundation that “EPA has always discouraged the use of private emails. The EPA Inspector General researched this and confirmed they found no evidence to support that the EPA “used, promoted or encouraged” the use of private email accounts to circumvent federal records management requirements.”

E&E Legal Executive Director Craig Richardson said in a statement late Tuesday that “this administration has a real problem understanding the rules when it comes to using private email accounts to conduct public business. Hillary Clinton has set the bar for flagrant use of private email to conduct official business ‘off-line,’ but EPA comes in at a close second.”

“In so doing, the EPA has essentially outsourced it’s rule-making function to ‘green’ activists and rent-seeking lobbies hell-bent on destroying traditional energy sources in an effort to replace it with renewables, an industry that their wealthy benefactors are already making a killing at the taxpayer and ratepayer expense,” Richardson said.

“The e-mail from Michael Bradley, an individual representing private interests, to Joe Goffman and Gina McCarthy, which Goffman forwards to a non-official email account of his colleague, are obvious efforts to impact federal regulation outside of the required system,” E&E Legal Senior Legal Fellow Chris Horner said in the Tuesday statement.

“That it is a regular practice of senior officials of this EPA to use private e-mail accounts and other ‘off-book’ techniques to craft rules with ‘green’ activists with clear financial and political interests is now clear beyond a reasonable doubt,” Horner said.

Horner and E&E Legal also revealed extensive collusion between EPA and outside groups in creating proposed regulations that have a dramatic impact on the national economy, especially in the area of employment and energy. Additionally, E&E Legal showed Goo’s “extensive” communication with lobbyists through his Yahoo account to create EPA’s greenhouse gas regulations.