JUSTICE CLARENCE THOMAS: Why are Americans' Second Amendment Rights So Easily Ripped Away?

Supreme Court Justice Clarence Thomas had not asked a question during oral arguments since 2006 when, during the arguments in Voisine v. United States on February 29, he posed a question to the government’s counsel, Assistant to the Solicitor General Ilana Eisenstein.

Immediately, the anti-Thomas press, always eager to portray the justice as a clueless incompetent (after all, he rejects most of the leftist notions about the role of government), indulged in nasty headlines such as “It Speaks!” Imagine the furor if a leftist icon were called “it.”

Exactly what is Voisine about and what did Justice Thomas ask?

The case deals with a seemingly dry question of statutory interpretation: Does a misdemeanor crime that requires only a showing of recklessness qualify as a crime of domestic violence under 18 U.S. Code Sections 921 (a)(33)(A) and 922 (g)(9)?

That latter part of the U.S. criminal code is known at the Domestic Violence Offender Gun Ban, a.k.a the Lautenberg Amendment, signed into law in 1996 by President Clinton. It makes it a felony for anyone who has been convicted of a domestic violence misdemeanor ever to have anything to do with firearms: shipping or transporting them, owning or using them, even possessing ammunition. 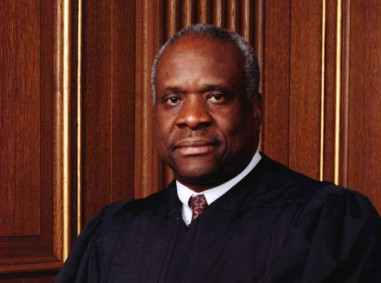 One strike and you’re out under this law.

In the two cases from Maine joined in Voisine, the defendants had been convicted of reckless domestic violence misdemeanors and were later found in possession of firearms, leading to their prosecution for violating the federal gun ban. They moved to have the cases dismissed on the grounds that the Maine statute, under which someone can be convicted for intentional, knowing or merely reckless conduct isn’t covered by the Lautenberg amendment. The trial court ruled against their motions and they appealed to the First Circuit Court of Appeals, which affirmed with one judge dissenting. (If you want much more detail about the case, Rory Little’s post on SCOTUSblog has it.)

Ms. Eisenstein had just finished her argument that the First Circuit’s decision should be upheld when Justice Thomas spoke up: “Can you think of another area where a misdemeanor violation suspends a constitutional right?”

Taken aback, she floundered for a reply and Justice Thomas interjected, “You’re saying that recklessness is sufficient to trigger a misdemeanor violation of domestic conduct that results in a lifetime ban on possession of a gun, which at least as of now is still a constitutional right.” Again, he put the question: “Can you think of another constitutional right that can be suspended upon a misdemeanor violation of a State law?”

Ms. Eisenstein admitted that she knew of no other instance where a misdemeanor can have that effect, but tried this route of escape: “Other examples, for example in the First Amendment context, have allowed for suspension or limitation of a right to free speech or even free association in contexts where there is a compelling interest and risk associated in some cases less than a compelling interest under intermediate scrutiny.”

The exchange continued (you can read it in full here) for a while, but when Justice Thomas gets back to the First Amendment, he asks, “Let’s say that a publisher is reckless about the use of children…and it’s a misdemeanor violation. Could you suspend that publisher’s right to ever publish again?”

Justice Thomas: “So how is that different from suspending your Second Amendment right?”

Point made. The Second Amendment right to keep and bear arms (which Justice Thomas ominously says is “at least for now” a right) is treated as being in a different class from the rest.

Of course, it should not be. In their amicus brief, Gun Owners of America state, “As a preexisting right, the right to keep and bear arms ought to enjoy the same stature as other inalienable rights, most notably, the freedoms of religion, speech, press, assembly, and petition.” It ought to, but probably won’t. In fact, the right to keep and bear arms is apt to erode further unless, miraculously, another Second Amendment defender takes the seat of the late Justice Scalia.

In all likelihood, a divided Court will affirm the First Circuit’s decision (a 4-4 split always affirms the lower court’s ruling). The defendants will have to stand trial and probably be convicted. The precedent will be set that any American who is ever guilty of even a “reckless” domestic violence misdemeanor will henceforth have to choose between owning a firearm – no matter how urgent his need for self defense — and a long prison term (up to ten years) and huge fine (up to $250,000) if caught.

Our so-called liberals who have no reason to fear for their own safety are intent on taking guns away from as many Americans as they possibly can. Justice Thomas can’t stop them without more help on the Court.