It's not just Granny Catlady who stinks. It's also her husband:

Clinton became so flatulent at one point during his presidency that his close friend and biographer Taylor Branch “worried about his health,” according to an audio diary kept by Branch to record his thoughts after interviews with the president.

“I haven’t really noted this before because I know it’s a little embarrassing, but tonight I noticed it a lot,” said Branch after an interview with Clinton on May 11, 1998. “A lot of times when he was standing up, he was very flatulent.”

Clinton’s flatulence was so bad that it served as “an accompaniment in the background” of their conversations, Branch said... 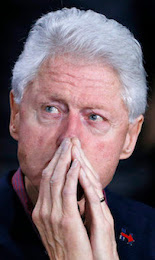 ...Clinton also never bothered to excuse himself or offer an apology for the distracting bodily function, according to Branch...

...“That big nose, I worry about the color in it. It looks like an alcoholic’s nose but I know he’s not a big drinker,” said Branch. “It has some deep reds and even purples in the side of his nose...”

...Many commentators ... have noted that Clinton appears to be a shell of his old self as he travels the country stumping for his wife.

The New York Times wrote last week that Clinton “looked smaller and his voice seemed weaker than in past campaigns” and also that “people had to strain to hear him at times.” Nevada political expert Jon Ralston noted that he “looked gaunt.” During his wife’s concession speech after losing the New Hampshire primary to Bernie Sanders in a landslide, Clinton looked like he did not know where he was.

I guess this proves the old adage, which I just made up, that you can take the hick out of the sticks, but you can't take the sticks out of the hick.

Hitler had meteorism, look it up, it came from being gassed(no pun intended)in WW I. I'm serious, read John Toland's book on Hitler.It covers it. They supposedly had to open all the Windows after he left from meeting some dignataries in a foreign country!

it's evidence of the rot and decay from within

I saw Bill Clinton up close about fifteen years ago. His face was the color of tomato soup. I assumed it was from drug use.