SPECTACULAR: @JohnKasich Wants to End Deportations and Enact Amnesty in His First 100 Days in Office

With Sen. Marco Rubio (R-FL)’s presidential hopes terminated last week as his personal demons caught up with him—from his relationship with billionaire Norman Braman to his role in pushing Obama’s amnesty—the donor class has turned its eyes to John Kasich.

The hope seems to be that a Kasich's win in Ohio will not only deny GOP frontrunner Donald Trump delegates, but will also create a new vehicle for arriving at a contested convention.

Because the Kasich campaign was largely ignored as a non-factor prior to Rubio’s polling collapse, Kasich went months with virtually no scrutiny of even his most bizarre statements on the campaign trail. 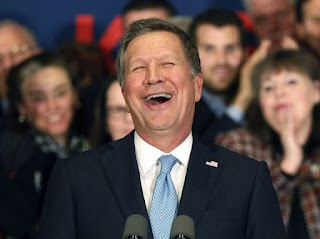 However, in recent days, Trump has increasingly set his sights on Kasich—whether it be Kasich’s role at Lehman Brothers during the time of the economic collapse, as well as Kasich’s support for NAFTA and Obama’s Trans-Pacific Partnership agreement—a deal which Donald Trump and Sen. Jeff Sessions (R-AL) have warned would destroy Ohio’s auto industry.

In particular, Trump has zeroed in on Kasich’s heretofore overlooked push for massive amnesty. Though it has transpired without much attention, Kasich has quietly amassed a string of bizarre, peculiar, and extreme statements on immigration that places him to the furthest leftward reaches of not just the Republican President field, but the Democratic Presidential field as well. This perhaps underscores an element of seriousness to Kasich’s previous declaration, which he had intended in jest: “I ought to be running in a Democrat primary.”

Below are just some of Kasich’s most bizarre and radical statements on immigration, which have flown under the radar.

Illegal immigrants are a “critical part of our society,” John Kasich told the Hispanic Chamber of Commerce last October. “For those that are here that have been law abiding, God bless them,” Kasich said—arguing that illegals “should have a path to legalization.”

2) “I couldn’t imagine” enforcing our current immigration laws: “That is not… the kind of values that we believe in.”

On the GOP debate stage in February, Kasich told millions of American voters that enforcing the nation’s immigration laws is not “the kind of values that we believe in.”

“I couldn’t even imagine how we would even begin to think about taking a mom or a dad out of a house when they have not committed a crime since they’ve been here, leaving their children in the house,” Kasich said. “That is not, in my opinion, the kind of values that we believe in.”

“To think that that we’re just going to put people on buses and ship them to the border—look at our World War II experience where we quarantined Japanese—I mean it’s a dark stain on America’s history,” Kasich said in November.

“We shouldn’t even think about it,” Kasich said of the “nutty” idea:

4) Illegal immigrants “are some of the hardest-working, God-fearing, family-oriented people you can ever meet.”

As Newsmax reported in August, when a New Hampshire town-hall attendee asked Kasich about illegal immigration and the burden illegal immigrants place upon the nation, Kasich dismissed the voter’s concern.

“A lot of these people who are here are some of the hardest-working, God-fearing, family-oriented people you can ever meet,” Kasich said referring to illegal immigrants. “These are people who are contributing significantly.”

Kasich made no mention of the fact that 87 percent of illegal immigrant households with children in 2012 were on welfare, according to a 2015 report based on Census Bureau data.

Kasich similarly made no mention of last year’s report from the liberal Migration Policy Institute which found that there are nearly one million illegal aliens in the United States with criminal convictions (820,000). This figure was not an estimation of total crimes committed by illegal immigrants—which would be a much higher number—but only those illegal aliens successfully identified, arrested, tried, and convicted.

5) Allowing ICE officers to do their jobs is not “humane”

In June, the Columbus Dispatch reported on a meeting that took place between John Kasich and an illegal immigrant and her son. After their meeting, Kasich said: “They’re just good people. They’re made in the image of the Lord, and you know, there’s a big element of compassion connected to how we treat people who are trying to find a way to a better life.”

7) Kasich has called for implementing an open borders-style policy where workers can come and go as they please.

In July, Kasich told Fox News’ Sean Hannity that we need to “have a guest worker program so people can come in, work, and then leave. Our program is too narrow now.”

Kasich claim that the nation’s guest worker program, which admits an unprecedented number of foreign workers into the country, is “too narrow” is astonishing—and places him squarely in the tiny minority of the Republican electorate, only seven percent of whom want to increase immigration.

Moreover, Kasich’s call for a guest worker program that will allow workers to come and go as they please represents the central pillar of the open borders philosophy. Under this global one-world theory, any willing employer should be able to hire any willing worker regardless of the country in which they reside—thus removing any right that American workers be entitled to get American jobs. This is similar to the policy European countries have within the European Union—namely, people are entitled to move freely from one country to another. Kasich is essentially laying out how the same legal structure could be adopted for the United States and all the foreign countries of the world.

8) Kasich would enact amnesty within his first 100 days.

In last Thursday’s CNN debate, Kasich told voters that he would enact the largest amnesty in U.S. history within his first 100 days in office. “For the 11 and a half million who are here, then in my view if they have not committed a crime since they’ve been here, they get a path to legalization. Not to citizenship. I believe that program can pass the Congress in the first 100 days,” Kasich said.

“I don’t believe it should be a fundamental part of this whole thing because I think it remains dividing to people, to be honest with you,” Kasich said trying to take the issue off the table. “Let these people who are born here be citizens and that’s the end of it. I don’t want to dwell on it.”

“If you are born here, you’re a citizen. Period. End of story,” Kasich told the Hispanic Chamber of Commerce last October.

When PBS’ Gwen Ifill pressed Kasich on how his position on the issue “rubs a lot of Republicans the wrong way,” Kasich said: “Well, what do you think we’re going to do? Go chasing them down? And put these big lights on top of cars? And go into neighborhoods hunting them down? That’s not—that’s not what America is.”

Kasich again repeated his talking point likening illegally entering the United States and residing here in violation of U.S. immigration law, to cutting in line at a Taylor Swift concert: “Look, nobody likes that they broke the law, they ditched the line. I have told my kids, as much as you love Taylor Swift, you don’t ditch the line to get into a concert.”