The most disturbing aspect to the Donald Trump candidacy is not the empty rhetoric, non-substantive solutions, or even his brash politically-incorrect style. The most disturbing aspect of his candidacy is what it says about so many of our fellow citizens. A veritable personality cult is developing around the GOP frontrunner rivaling that of the Democrat nominee from four and eight years ago. And it’s just as speciously founded.

Some assert that the Trump bandwagon is reshaping the Republican Party. Some go even further and claim that his candidacy is simply bringing out sordid and ignoble characteristics of the party that have been heretofore more latent and simmering under the veneer surface of decency. Such characterizations are erroneous.

Both major parties are grappling with atypical undercurrents that are largely reshaping the face, and perhaps the heart, of each. Regrettably, both are founded in a pejorative form of populism, whether it’s the promise of “free stuff” for adherents of the Democrat Party, or the abject anger aimed at unresponsive and tyrannical government for the Republicans. Such populism is destructive to the political process in a republic, as it appeals to citizens’ selfishness and most base instincts. And it’s culturally destructive as it drags the public dialogue to the lowest common denominator, while appealing to emotion at the expense of logic and reason. 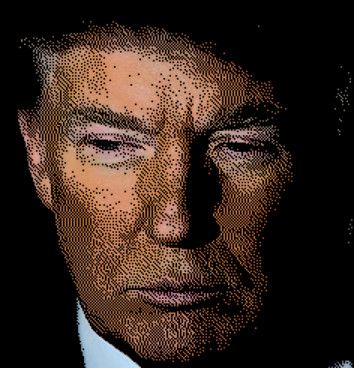 In the last two presidential election cycles there was a veritable cult following for “The One” that venerated and idolized him regardless of what he said or did. He could do no wrong. His speech was lofty; language grandiloquent; substance lacking; and promises vapid.

This year the leading GOP candidate has a similar cult following. It doesn’t seem to matter that “Make America great again,” and “we’re going to win…” constitute 50% of his specious speeches, with the other 50% reiterating his greatness. With little substance accompanying his bold statements, it’s hardly distinguishable from the empty “Hope and Change” mantra of Obama’s cult following.

But unlike Obama’s elevating elocution, Donald Trump’s speech is degrading, debasing, and uncivil. As Mitt Romney aptly delineated this week, Trump is one who “mocked a disabled reporter, who attributed a reporters question to her menstrual cycle, who mocked a brilliant rival who happened to be a woman due to her appearance, who bragged about his marital affairs, and who laces his public speeches with vulgarity.” But to the cult of Trump, civility, class, and decorum don’t matter.

Whether we like it or not, the fact is that the president of the United States is the face of the nation. For all of Obama’s policy and ideology failures, at least he was not always an embarrassment in terms of his conduct and decorum. He has typically filled his role as face of America to the world with class. He has acted presidential.

Trump has no illusion of what it means to act presidential, and is redefining it to the depths of depravity with his tactlessness and inexorable ad hominem attacks on anyone who crosses him. But to the cult of Trump, it doesn’t matter.

Following Barack Obama’s Super Tuesday victories in 2008, he revealed his “messiah complex” by claiming, “We are the ones we’ve been waiting for.” Millions of Americans seemed to agree whilst gullibly falling for his grandiloquent, yet vapid speech. He could do no wrong in the eyes of his cult-like followers.

And perhaps unsurprisingly, the leading narcissist of the 2016 presidential race, claims that, “I could stand in the middle of 5th Avenue and shoot somebody and I wouldn’t lose voters.” Such is the power of the cult of personality and its hold on the sycophants who suspend reason in order to wholly buy into a campaign idiom of populist appeal. To the cult of Trump, it doesn’t matter.

When Obama preyed upon the emotions of low information voters, many on the right were critical not just of Obama and his insubstantial campaigns, but of the uninformed, ill-informed, and misinformed voters who flocked to him in ignorance. Ironically, many of those critics are now devout members of the cult of Trump.

Compromise is a bad word and anathema to the political purist. Yet in the cult of Trump, it doesn’t matter, because compromise is rebranded as “the art of the deal” and the great dealmaker is adored and praised.

Just as sound-thinking Democrats would likely prefer to not have their party seen as the party of economic illiteracy, abdication of personal responsibility, and freeloaders, so also most Republicans don’t appreciate Trump’s redrawing the face of their party to reflect the crassness, rudeness, callousness, debasement, and moral turpitude of their leading presidential candidate. Such regression in both parties does not portend well for the republic.

In that context, both major political parties are being redefined, and it’s to the detriment of the nation and the freedoms and liberties we hold sacrosanct. Let’s hope there are enough sane and sensible people to save us from the populists in both parties!

Today for the Republican party, the choice is remarkably similar to the ’08 and ’12 choices for the Democrats, and it comes down to the classic Platonic dichotomy of form versus substance. Regrettably for the GOP this time around, not only is the substance lacking, but even the form is not appealing, as it culturally spirals down to the lowest common denominator and our most base instincts.

When reason and logic are employed in the candidate and presidential selection process, policy matters, character matters, and substance matters. When a cult of personality rules the process, none of it matters. And there can be little doubt of how the Trump zealots are amassing behind his persona. And he knows it. He can say or do anything, even “shoot someone in the middle of 5th Avenue,” and his adherents remain faithful. That’s when you know all reason has been suspended.

Yep. Insulting us is just the way to win over our hearts and minds. Do you really want us to be so mad that we don't even bother to vote for Cruz if he manages to pull it out?

Yes, yes, we get it. Trump supporters are stupid, ignorant, inbred cult-followers. Got it. Ignoring it.
Do you really believe that this is the way to convince us? You certainly don't sound like my intellectual or moral superior, any more than does the whining child in the playground, threatening to take his ball and go home.
Grow up.

I think Mr. Larsen is only pointing out the obvious.

Support whoever you want to.

I'd vote for Trump if he's the nominee. But my hope is that we have a consistent, stable conservative as the candidate. For the first time since Reagan.

So Trump wants to sue media outlets for dedicating more than 50% of candidate coverage to Trump - less than 17% for Cruz. Self-funding is easy under these circumstances.

As for Trump saying what the vast majority thinks, 30% is not a vast majority. God, please keep us from another liberal narcissist!

Trump is the other side of the coin of Obama. Heads you lose, tails the statists win. Perhaps he will surprise but it appears to me that he doesn't believe in anything but Trump. Not very encouraging.

As I said to a friend of mine I hope in two years time if Trump wins I won't have to watch you eat crow. The country can't afford another snakeoil salesman.

Let it burn! And go the way of the Whigs.

I'm a female TIRED of all these metrosexual shemales,ie,Obama. Trump is just my dad pulling his belt off ready to whoop ass and all these kids who want to destroy our house and our children!

Dearest Doug, don't ever say your a "two-bit blogger" most of the sites I visit have a link on the side bar to your web site. Most of us enjoy the diversity of option on your site. I must admit that is see links to site all the time from other conservative site.

IMHO you have a great deal of common sense on the events you cover..

What it really is, is not wanting that smooth, fast talking, smiling in your face whilst looking for a good place to put the knife facade! Americans have gone for "presidential" types over and over again, to no avail! Now they are reaching for the other extreme out of desperation! When it comes to voting this year, I'll ask myself, "Do I believe this person is a patriot? Do I believe this person loves this country and will strive to do what is right for this country?" I will also ask myself, "Do I believe that this person has the intelligence to get this country out of this mountain of shit that obama is leaving for the next president to clean up?" I WILL NOT be asking myself about his table manners or if he is P.C.!!!!