Every Republican Candidate is Hitler

“Except for Adolf Hitler's extermination of the Jewish people, the American bombardment of defenseless peasants in Indochina is the most barbaric act of modern times.”

That quote didn’t come from some Soviet hack coughing up copy for Moscow, but from Democratic presidential candidate George McGovern (some years later, McGovern would compare the Communist massacres in Cambodia to the Holocaust and call for some of that barbaric military intervention).

Vice President Hubert Humphrey also brought out Hitler when running against Nixon, declaring, “If the British had not fought in 1940, Hitler would have been in London and if Democrats do not fight in 1968, Nixon will be in the White House.”  Chicago Mayor Daley had accused Nixon of “Hitler type” tactics.

McGovern had set a record for comparing Nixon to Hitler, which made him very popular with the left, but he hadn’t originated it. Comparing any Republican presidential candidate to Hitler had been a standard Democratic political tactic for some time no matter how inappropriate it might be.

Before McGovern was comparing Nixon to Hitler, he was comparing Barry Goldwater to Hitler. Goldwater had a Jewish father and a distaste for Socialism, which would have made him unwelcome in the ranks of the racially and politically pure National Socialists, but that didn’t stop the Hitler accusations from being hurled by the Democratic party and its political allies in the press.

Governor Pat Brown of California said, “Goldwater's acceptance speech had the stench of fascism. All we needed to hear was Heil Hitler.” Mayor Jack Shelley of San Francisco claimed that Goldwater strategists got all their ideas from Mein Kampf. 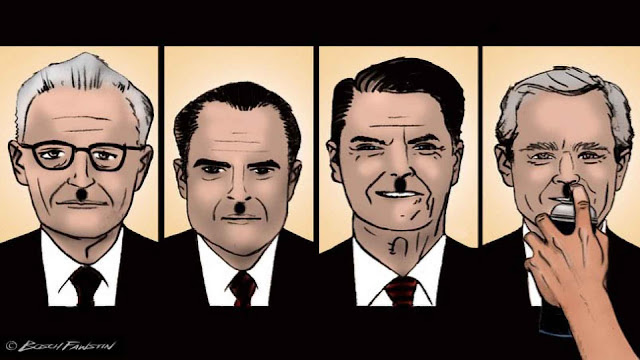 Even though Goldwater had been an early NAACP member, NAACP leader Roy Wilkins warned, "Those who say that the doctrine of ultra-conservatism offers no menace should remember that a man come out of the beer halls of Munich and rallied the forces of rightism in Germany. All the same elements are there in San Francisco now."

The NAACP accused Goldwater of appealing to “fear and bigotry”. Martin Luther King said, “We see danger signs of Hitlerism in the candidacy of Mr. Goldwater.”

Union leaders launched a national campaign to denounce Goldwater as Hitler II. "I have drawn a parallel between Goldwater and Hitler and I make no apology for drawing that parallel," George Meany of the AFL-CIO declared. While Goldwater wasn’t Hitler, the CIO part of the AFL-CIO had strong Communist influences and after the Hitler-Stalin pact, some unions within it staged strikes to sabotage production and prevent aid from reaching the Allies who were fighting Hitler. Not only was Goldwater not Hitler, but some of the organizations represented by Meany had aided Hitler when Stalin told them to.

Accusing Republicans of being Hitler for assorted petty reasons dates back to the time when Hitler was still around. FDR accused Republican candidate Wendell Willkie of using “Hitler tactics” by repeating his slogans frequently. But it was the frequent associations of Republicans and Hitler by Democrats that was the true Big Lie. Its only purpose was a senseless association through the repetition of ridiculous and baseless accusations that every single Republican was just Hitler in a better suit.

Typical of this tactic was Senator Tom Lantos ranting, “If you overlook your involvement in the KKK, or the Nazi party, or the Republican Party, you are lying.” The issue at hand had nothing to do with Nazism. It was about Clinton’s Secretary of Agriculture taking bribes. The goal was to associate Republicans with Nazism by classing the two together as frequently as possible regardless of relevance, decency or truth.

In the Iran-Contra trial, Oliver North was accused of “following Adolf Hitler’s official strategy”. What did one have to do with the other? Nothing. But this sort of lazy accusation had become typical and routine. William Shirer, who had also compared Nixon’s bombing of Hanoi to the Holocaust and called Nixon an “apt pupil” of Hitler (Pentagon spokesman Jerry Friedheim was Goebbels), compared Reagan to Hitler for intervening in Grenada. Then Shirer compared Bush I to Hitler for trying to outlaw flag burning.

President George W. Bush inherited this banality of Hitlers. To left-wing Truthers, open and covert, 9/11 was the Reichstag fire, the Patriot Act was the beginning of a national dictatorship and Bush was a dictator. As Kurt Vonnegut quipped, “The only difference between Bush and Hitler is that Hitler was elected.” Hitler wasn’t elected, Bush was, but you can’t expect a left-wing loudmouth to know history.

Congressman Charles Rangel compared the Iraq War to the Holocaust. “This is just as bad as the 6 million Jews being killed." (Rangel had also claimed that the Contract with America was worse than Hitler.) Senator Durbin compared Gitmo to Nazi concentration camps. Senator John Glenn compared Republican arguments to Nazi propaganda. “It’s the old Hitler business… if you hear something repeated, repeated, you start to believe it.” Like repeatedly accusing Republicans of Nazism.

Congressman Keith Ellison, a former Nation of Islam supporter who had defended its anti-Semitism, compared the September 11 to the Reichstag fire while hinting at 9/11 Trutherism.  Al Gore claimed that “The administration works closely with a network of rapid-response digital Brown Shirts”.

Democratic Senator Robert Byrd, a former Klansman, compared Bush to Hitler stooge Herman Goering. Byrd, who had filibustered the Civil Rights Act, also compared efforts to block Democratic filibusters to Nazi Germany. The “nuclear option” that Byrd was denouncing became a reality under Obama and Reid, but by then using it did not make Senators Democrats into the successors of Nazi Germany.

To most people, Nazi analogies summon up images of the Holocaust and a ruthless dictatorship. To the left however, any populist reaction against their rule is Nazism.  In their world, there is a battle between progressive and reactionary forces. Any movement that dares to run for office by challenging progressive policies is reactionary, fascist and the second coming of the Third Reich. Republican victories are lazily attributed by liberal hacks to mindless public anger being exploited by right-wing demagogues.

And so the only thing we can truly be certain of is that any Republican nominee will be Hitler. It doesn’t matter what he believes. It doesn’t matter if Democrats considered him a moderate 5 minutes ago. Accusations of Nazism remain the default argument for a Democratic Party turned far to the left.

Optimists thought that the Democrats had reached “Peak Hitler” under Bush. But for the left there is no Peak Hitler. The same tired line of attack has been trotted out for fifty years. It will go on limping around the liberal corral for another fifty years or a hundred years. The Big Lie will continue being repeated to indoctrinate each new politically active progressive with the conviction that anyone to the right is Hitler and that every election is a brand new battle to stop Hitler 2.0 from taking over America.

Goldwater was Hitler. Nixon was Hitler. Reagan was Hitler. Bush was Hitler. None of the latter three men declared the Fourth Reich, made themselves dictators for life and ran concentration camps. But the Big Lie retroactively rewrites the past by claiming that last decade’s Hitler was a decent moderate while the latest Republican Hitler is a terrifying monster. Goldwater, Nixon and Reagan were all resurrected as moderate contrasts to each other and then to Bush. The process of recreating Bush as a moderate has already begun. And so each Republican makes the electoral journey from Hitler to a political moderate whom a latter generation of liberals mourns while complaining that this latest Republican really is Hitler.

They need some new slurs-racist and Nazi are getting dull.
MM

Except that Hitler himself was a Progressive.

And the Weimar Conservatives who sided with him wanted to bring back the Emperor.