There have been some interesting developments in the Hillary Clinton e-mail saga over the past two weeks.

In response to an FOIA request, conservative legal advocacy group Judicial Watch obtained documents which seem to show that Clinton was well aware her BlackBerry wasn’t secure from the very beginning of her tenure as the nation’s top diplomat. Correspondence between Senior Coordinator for Security Infrastructure Donald Reid, long-time Clinton aide Cheryl Mills and the NSA suggests the former First Lady had become “addicted” to her BlackBerry and essentially refused to use the secure desktop computer provided to her by security officials.

The e-mails published by Judicial Watch show Clinton and Mills went to great lengths to get around the ban on BlackBerry devices in Mahogany Row and the language in the correspondence clearly proves that the Secretary knew conducting State business from her unsecure phone was outside of the guidelines prescribed by the NSA. “These documents show that Hillary Clinton knew her BlackBerry wasn't secure,” Judicial Watch president Tom Fitton said.

Further, one of the e-mails Mills sent to Clinton regarding the pair’s discussions with the NSA is dated February 13. That’s a problem because it seems to contradict statements Clinton made about when she began using her private e-mail server for work related correspondence.

Although, as we noted on Monday, there’s some ambiguity, there are legitimate questions around why she did not turn over that e-mail and others sent prior to March 18. One explanation seems to be that, again quoting Fitton, “she didn’t want Americans to know about her February 13, 2009, email that shows that she knew her Blackberry and email use was not secure.” 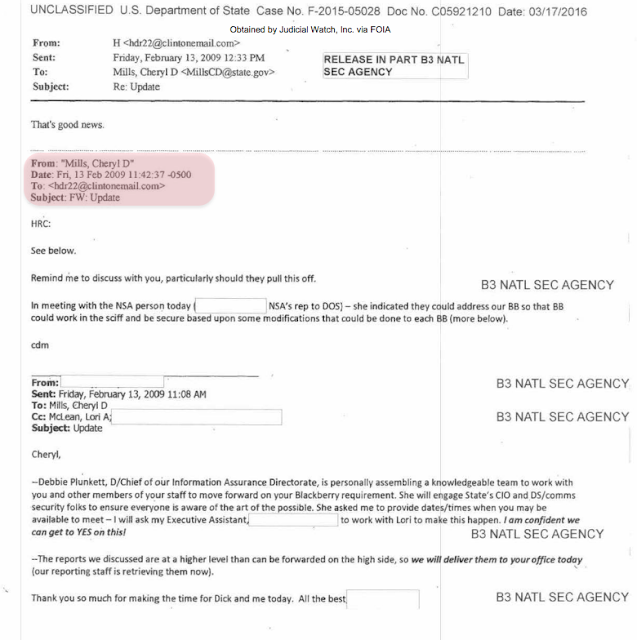 Now, in the latest developments from the never-ending Clinton e-mail saga, a second federal judge will allow Judicial Watch to seek sworn testimony from officials. "U.S. District Court Judge Royce Lamberth entered an order Tuesday agreeing that Judicial Watch can pursue legal discovery — which often includes depositions of relevant individuals — as the group pursues legal claims that State did not respond completely to a FOIA request filed in May 2014 seeking records about talking points then-U.S. Ambassador to the United Nations Susan Rice used for TV appearances discussing the deadly attack on U.S. facilities in Benghazi in September 2012,” Politico writes. “Lamberth is the second federal judge handling a Clinton email-related case to agree to discovery, which is unusual in FOIA litigation.”

As Reuters goes on to note, Judicial Watch has “filed several lawsuits, including one seeking records about the 2012 attack in Benghazi, Libya, that killed U.S. Ambassador Christopher Stevens and three other Americans.”

"Where there is evidence of government wrong-doing and bad faith, as here, limited discovery is appropriate, even though it is exceedingly rare in FOIA cases," Lamberth wrote in the order. "The government argues that this does not show a lack of good faith, but that is what remains to be seen, and the factual record must be developed appropriately for the Court to make that determination," Lamberth wrote.

Although the ruling is, to quote Fitton again, “remarkable,” the “practical impact of could be limited” because, as Politico goes on to point out, U.S. District Court Judge Emmet Sullivan - the first judge to give the go ahead for Judicial Watch to seek sworn testimony - has already received a discovery plan and will rule on it by the end of next month. In other words, Lamberth’s ruling is just icing on the proverbial cake.

"Discovery will allow us to get into the shifting explanations,” Fitton says.

Indeed. Or, as we put it on Monday:

“..the story keeps changing, and indeed that's the whole problem. At this point it's abundantly clear that Clinton would have been far better off telling the truth from the very beginning and the fact that incremental information continues to surface certainly seems to suggest that the former First Lady fully intends to admit only what someone else - in this case Judicial Watch - can prove.”

Well thanks to judges Sullivan and Lambreth, the group may be able to prove a bit more.

If every person connected with Mrs Clinton and who had access to her illegal server doesn't get charged, tried and convicted and be sentenced to Prison Time including herself,then there is No Law in the United States any longer and everybody just feel free to do whatever the fuck you want from now on,to include not paying taxes.