During Monday's Fox News town hall, Hillary Clinton repeated her outrageous claims that her private email server contained no classified material. Perhaps she could inform the FBI, the State Department, and various Inspectors General, which have designated more than 2,000 emails as classified, including 104 sent by Clinton herself, and 22 with a TOP SECRET designation.

During the town hall, Secretary Clinton faced a series of withering questions about her private email server. Among them was a quote from last year, in which Clinton claimed her private server contained no classified material.

On March 10, 2015, Secretary Clinton held a press conference at the United Nations in which she claimed that her private server contained no classified material. 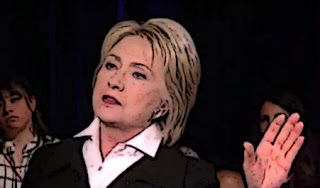 Clinton reiterated that outrageously false claim again today. But just last week, it was revealed Clinton’s email contained more than 2,000 classified emails, including 104 emails authored and sent by Clinton herself.

How stupid does Clinton think Americans are?

The answer, it would seem, very.

In fact, the American people have known for months that her private server contained classified material. With her willingness to tell baldface lies, it’s no wonder majorities of voters in primary states say they wouldn't trust Clinton as far as they could throw her.

Of course no one would trust Clinton as far as a hernia-inducing toss would take her.But I'd still like to see the throw.

Fixed it for you.

I have learned that many people cannot deal with reality if it interferes with their perceptions. This is how the people of Massachusetts kept electing that murderer Kennedy, despite how loathsome this creature was. Blacks wouldn't admit OJ was a murderer despite all the evidence. The Democrats defended a man who perjured himself and repeated his lies in front of hundreds of millions.

Some people cannot deal with the truth. These people are called Democrats. If you need proof watch the Hildabeast speech about Flint Michigan.

If democrats believe her, they are very, very stupid.