Missiles from Iran-Allied Territory Intercepted On Way to US


This is an interesting, but still very much a developing story.

Serbia's authorities are investigating reports that a cargo package bound for the U.S. containing two missiles with explosive warheads was found on a passenger flight from Lebanon to Serbia.

N1 television said the package with two guided armor-piercing missiles was discovered Saturday by a sniffer dog after an Air Serbia flight from Beirut landed at Belgrade airport. 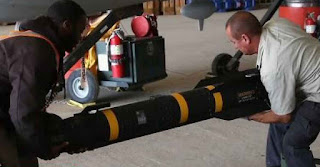 The Lebanon origin is what makes this story somewhat different because the country is currently dominated by Iran and its Shiite terrorist allies. So if this was a terrorist plot, which we don't know that it was, it appears likelier to have originated from Iran than from ISIS. Portland however was the site of a more conventional Sunni Islamic terror plot. But Shiites also have a presence there.

Another twist was the recently "misplaced" Hellfire that ended up in Cuba.

But where would Iran have gotten hellfire missiles? Like most of the US equipment in the hands of Shiite terrorists, Iraq. The US has sold plenty of hellfires to Iraq. And Iraq's government and military these days is controlled by Iran's Shiite puppets.