Hillary Clinton’s email scandal keeps on growing, with new revelations that offer more justification for an indictment. Yet the mainstream media have long maintained that Mrs. Clinton is not the target of the two ongoing FBI investigations, and they seem very uninterested in the latest evidence to be revealed.

However, a grand jury may be forthcoming. “My sources tell me that the Justice Department is close to empaneling a grand jury and deciding whether to grant statutory immunity to Huma Abedin, Hillary’s closest adviser,” writes [1] Ed Klein for NewsMax. Klein is a former foreign editor of Newsweek, and was editor-in-chief of The New York Times Magazine from 1977 to 1987. “That things have gotten this far in the investigation indicates that FBI director James Comey is moving inexorably toward recommending to Attorney General Loretta Lynch that Hillary be indicted,” added Klein.

While President Obama may be content to pre-judge the FBI investigations [2] as unlikely to find anything criminal in Democrat presidential candidate Clinton’s behavior, more and more evidence has appeared showing that Mrs. Clinton is a deceitful liar replete with conflicts of interests and even pay-for-play as secretary of state. 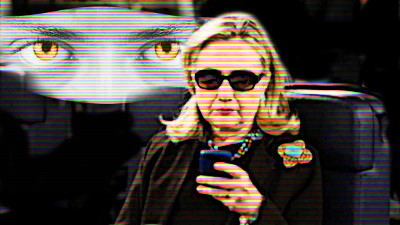 Recently released Judicial Watch emails [3] show the then-secretary of state’s staff coordinating with Clinton Foundation Director for Foreign Policy Amitabh Desai to arrange a visit between Libyan president Mohamed Al-Magariaf and Bill Clinton. “Libyan president Almagariaf [sic] is asking for a meeting with WJC next week. (He is confirmed to come to CGI [the Clinton Global Initiative]),” wrote the foundation’s Desai in an email on September 17, 2012 to Secretary Clinton’s aide, Cheryl Mills. “Would you recommend accepting or declining the WJC meeting request?”

Such emails demonstrate the close ties between the Clinton Foundation and Mrs. Clinton while she was in office. Not only did her staff grant permission for a foreign head of state to meet with her husband, she was also encouraged to thank particular supporters for giving to the Clinton Foundation.

On August 22, 2009 Desai sent an email outlining the names and organizations of supporters of the Clinton Foundation, from UNICEF to the Nduna Foundation, and others. “One question is if we want to see if there is a decent mass of fs [funds] related commitments to announce together at closing as a ‘mega’ commitment,” wrote Caitlin Klevorick, who was Senior Advisor to the Counselor and Chief of Staff to the secretary of state at the time.

Judicial Watch also points out that this Freedom of Information Lawsuit that elicited these 276 previously unseen emails “had previously forced [4] the disclosure of documents that provided a road map for over 200 conflict-of-interest rulings [5] that led to at least $48 million in speaking fees for the Clintons during Hillary Clinton’s tenure as Secretary of State. Previously disclosed documents in this lawsuit, for example, raise questions about funds Clinton accepted from entities linked to Saudi Arabia [6], China and Iran, among others [7].”

Even The Washington Post acknowledged [8] last year that the Clinton Foundation violated the ethics agreement it reached with the State Department governing potential conflicts of interest between the Clinton Foundation and Mrs. Clinton’s work as secretary of state, with the foundation hauling in millions of dollars from seven countries during her tenure.

The Associated Press reported [9] last November that “The Bill, Hillary and Chelsea Clinton Foundation has filed revised tax returns for four years, including changes that reflect millions of dollars in grants donated by foreign governments during the years that Democratic presidential candidate Hillary Rodham Clinton served as secretary of state.” But these are generally one-time reports in the mainstream media that rarely get talked about on the TV networks, or receive any follow-up in The New York Times or Washington Post. They don’t want to burst the Hillary bubble.

Thanks to the documents released to Judicial Watch, there is further proof that Mrs. Clinton was aware of the security risks of using her BlackBerry to send and receive classified information—and that she has not turned over [10] all of her emails, as claimed. “Clinton chose not to use a laptop or desktop computer that could have provided her access to email in her office…” reports [11] CBS News. In other words, Mrs. Clinton was relying on her BlackBerry for communication.

However, Mrs. Clinton pushed for the NSA to provide her with a secure BlackBerry that could be used in Sensitive Compartmentalized Intelligence Facilities (SCIF) in the State Department’s Mahogany wing. “Days later, however, NSA decided against providing Clinton with a super-secure BlackBerry,” writes [12] Chuck Ross for The Daily Caller on March 24. “But she continued to use a personal device anyway—a decision that likely made her more vulnerable to being hacked.”

The Washington Post is reporting [13] in Monday’s paper that the NSA and other intelligence and security officials who were working with Mrs. Clinton during the transition period were unaware that her BlackBerry “was digitally tethered to a private email server in the basement of her family home,” and as a result, “Those officials took no steps to protect the server against intruders and spies, because they apparently were not told about it.”

CBS, in writing about the Blackberry email, reports that “In recent months, Clinton has said her home-based email setup was a mistake, but that she never sent or received anything that was marked classified at the time.” By only including that assertion—which has been disproved multiple times—CBS upholds the Clinton myth that the intelligence community is somehow overclassifying Mrs. Clinton’s emails.

Similarly, The Hill’s Julian Hattem wrote [15] on March 16 that “Clinton’s use of a private email server throughout her tenure as secretary of state has become a nagging political problem for her presidential campaign. Critics contend that it may have skirted federal recordkeeping laws and could also have jeopardized U.S. secrets.”

The fact that Mrs. Clinton broke the law and jeopardized American secrets is more than an assertion—it is a provable fact. What remains to be seen is whether FBI Director James Comey intends to recommend an indictment to the Justice Department.

“Klein says that his sources say that Attorney General Loretta Lynch would likely duck the decision on indicting Hillary, punting it to a special counsel to give it at least the appearance of nonpartisan impartiality,” writes [16] Dick Morris.

It is notable that Mrs. Clinton’s IT specialist, Bryan Pagliano, who set up her private email server, has received immunity from the FBI. “And, keep in mind, there is no need to grant immunity if no testimony is required,” writes Morris.

Will Director Comey have the guts and the integrity to buck the Obama administration’s assertion that its investigation will not lead to criminal proceedings? Whatever Comey’s decision, the mainstream media’s goal is clear: exonerate Mrs. Clinton from her past mistakes and current lies, and ensure that she achieves victory in November.

Will the media abandon their desire to see the Democrats hold on to the White House long enough to report on the true extent of how corrupt the Clintons have been for a very long time?

Read more at Accuracy in Media.