DEMOCRAT LEADERSHIP SUCCESS STORY #70 BAJILLION: 30 Blocks of Ya Gotta See It to Believe It

I got frustrated Monday morning on the Schuylkill Expressway when traffic ground to a halt just before City Line Avenue. I impulsively got off at City Line Avenue and traveled up to Belmont Ave. I took Belmont through Fairmount Park (where dead bodies are found on a regular basis) to Girard Avenue. After making the left on Girard, you enter a land time forgot, along with hammers, brooms, paint brushes, trash cans, marriage licenses, school books or condoms. This stretch of West Philly makes the area around the zoo seem like paradise.

The vacant, trash strewn, weed infested lots along this decaying stretch of squalor are the highlight of the trip. There are a couple bars, nail salons, and daycare centers (can you imagine the “care” the children receive). But for the most part it’s unadulterated ghetto, with garbage blowing along the ancient trolley tracks like sage brush in the old west. 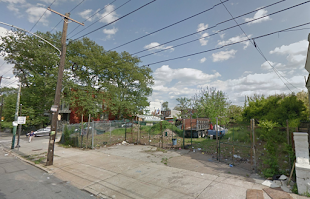 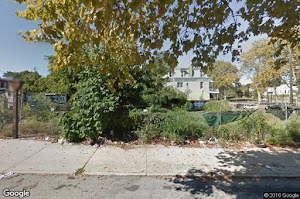 As I carefully maneuvered along this corridor of collapse I had plenty of time to observe the surroundings, as the school bus ahead of me and the miss-timed stop lights had me stopping every few hundred yards. What I saw was depressing, sad, and infuriating. I’ve now come to the conclusion, the more murals per square mile, the worse off economically the neighborhood in Philly. This section of Girard Avenue is blooming with murals of black people doing great things, so it is in really bad shape.

The row homes along this section of squalor were built in the 1920s. You can see from the architecture they were fine, well built, beautiful homes at one time. Now, fifty percent of them have broken and boarded up windows. The front porches are in a state of collapse. No one has put a drop of paint on the outside in decades. Orange eviction notices are plentiful. The cement steps are crumbling. The front yards are filled with debris, garbage, weeds, and drug paraphernalia. I can only imagine what these hovels look like on the inside. 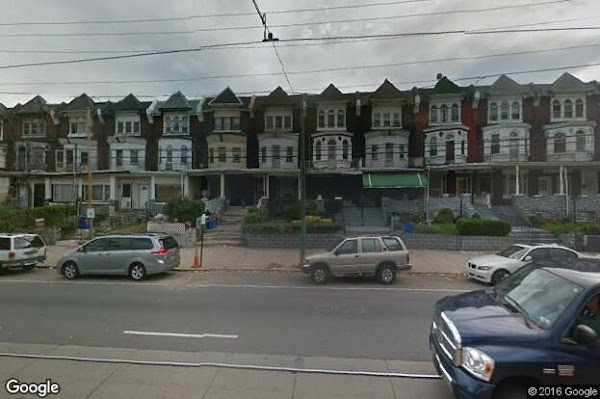 Sixty years of Democrat rule, welfare state solutions, white flight, public education, political corruption, and complete disregard for living in a civilized manner by the black residents of this area have led to a total breakdown of society in West Philly. See how this same block looked in the 1930s. Would it be racist to point out that West Philly was less than 15% black in 1930 and it is now over 80% black? Is there a correlation between the race and the upkeep and cleanliness of a neighborhood? Or is it just a coincidence?

So as I was pondering the never ending scenes of squalor, I came upon a vision that virtually took my breath away at 39th and Girard. I turned to my right and before me was a glorious mural of black people playing polo in the streets of West Philly on the side of a crumbling hovel. I didn’t know whether to laugh or laugh even harder at one of the most ridiculous things I’ve ever witnessed in West Philly. I started wondering when Prince Charles would be holding his next royal polo match on a street corner in West Philly amongst the gang bangers, whores, and drug addicts. 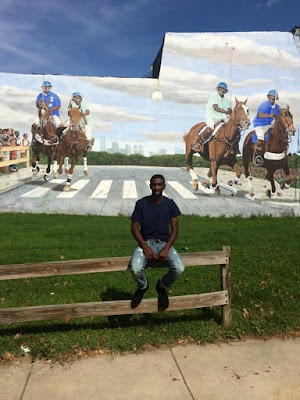 The artist must have one helluva sense of humor. I’m bemused by the hundreds and hundreds of colorful murals dotting the bleak landscape of West Philly. What is this supposed to accomplish? Do the liberal idiots running the city really think having white artists paint murals of black people doing stuff black people don’t do, is going to inspire fatherless, uneducated, unmotivated black kids to become polo players – a sport of the .01%? The idiocy is breathtaking to behold. A realistic mural in West Philly would show an 18 year old shooting another 18 year old during a drug deal.

Millions are wasted on this murals program that should be used to clean the garbage off the streets, repair the collapsing porches, and slapping some paint on window panes. These vacuous efforts to boost the self-esteem of black kids are par for the course with liberal morons. Do you know what builds self esteem? Doing well in school. Getting a real job paying real wages. Having a supportive father and mother who are proud when you succeed and tell you so. Living in a neighborhood where the residents keep their homes presentable and their streets clean. The state can’t give you self-esteem through welfare payments and glorious murals of black people doing great things.

But the new mayor’s master plan to revive West Philly and the rest of the ghetto neighborhoods is the same old shit in a different package. He announced this week he wants to spend $600 million the city doesn’t have on renovating recreation centers, parks and libraries in the city. Yep. $600 million of union construction jobs to pay off the cronies who got him elected. Most of the people in West Philly wouldn’t know what to do in a library. The rec centers and park are where most of the murders happen in the city.

And it gets better. Mayor Kenney doesn’t have any of the $600 million on-hand. The city already has 22% of their annual budget going toward debt payments from previous administration plans to eliminate blight in the city. Based on West Philly, I’d say their eliminate blight initiatives have not been a resounding success. But construction unions did just fine. Another 15% of the budget goes towards the gold plated government union pensions, headed to 20% in the next few years. Saying the Philadelphia budget is constrained would be an understatement.

Kenney’s plan is to BORROW another $300 million, introduce a soda tax (which will hurt the poor the most), and raise other taxes and fees to pay for his “make a union worker happy” plan. A critical thinking person might ask, why haven’t the 156 recreation centers and playgrounds, 143 neighborhood parks, and 54 libraries throughout the city been kept up on an annual basis within the existing city budget? Why do they suddenly all have to be refurbished and renovated at the same time? This is just more liberal Keynesian spending designed to reward cronies. Nothing ever changes in Philly.

Recreation centers, playgrounds, parks, and libraries are nice to have. They don’t replace fathers, reading books, and cleaning up your own neighborhoods. The public schools are rotting, filthy, decrepit shitholes. If you are going to spend $600 million you don’t have, why not fix up as many schools as possible? Nope. Kenney needs to make his mark with something big and newsworthy. When your city is on fast train to bankruptcyville, why not accelerate by borrowing another $300 million.

There is one thing you won’t see in Kenney’s budget and that is any cutting of the bloated union bureaucracy, outsourcing to private industry, or tax cuts for the citizens or businesses. Maybe he can use some of the $600 million to build a polo stadium for all the black polo players on Girard Avenue. That would surely revive those blocks of squalor.

If you think I’m exaggerating the conditions along Girard Avenue, please take a virtual tour via Google maps and see for yourself.

Thanks for your posts on the Dem trail of destruction in Philly.

I grew up there (West Oak Lane and, subsequently, once - and more or less still - leafy Elkins Park (same high school as Mark Levin and PM Netanyahu). The city was horrid then, and much worse now. My daughter is a recent grad of Temple U. She escaped to the liberal suburban nuttiness of SoCal, and I to just outside the grubby reach of the socialist nightmare that is Seattle.

Philadelphia, with all of its exceptional history, is a thoroughly broken city that has for decades suffered from the blight that comes with the terminal insanity of liberalism.

Is Quinn serious when he asks if it's a coincidence that the decay of the city correlates to the increase in black population??? Because if it is a coincidence, then it sure seems to be happening a lot, LIKE EVERYWHERE there are more then a sprinkling of blacks.

Is there a more sure Kiss of Death for a city then to become populated by blacks and then to elect blacks to run the city?????
MM

1) That section of Girard is technically US 30, The Lincoln Highway