FLASHBACK: John Kasich's Diabolical Obamacare Expansion, Bypassing the Legislature and the Will of the People

Ohio Gov. John Kasich went around the state legislature to expand Medicaid under Obamacare in 2013, but that’s not the story he’s telling voters on the campaign trail.

Kasich, a Republican candidate for president, introduced a budget in February 2013 that included the expansion of Medicaid to working-age adults with no kids and no disabilities that was part of the 2010 health care overhaul. For months, Kasich pressed the state legislature to approve the expansion. And they steadfastly refused.

How does this compare to what Kasich is telling Republican presidential primary voters? 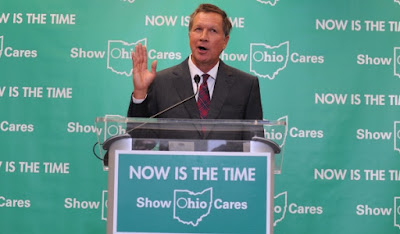 Kasich said General Assembly leadership agreed to pass the Medicaid expansion through the Controlling Board, a quasi-legislative panel of six legislators and one executive appointee, because “we couldn’t get a vote.”

“Now I didn’t just do this on my own, young lady, I did it with the blessing of the leadership and we got it done,” Kasich said.

Former state Rep. John Adams, the fourth-ranking member of the Ohio House majority leadership at the time, told Watchdog.org he was never involved in any such conversation.

“They did not have a caucus meeting to tell everybody, ‘this is what we’re going to do,'” Adams explained. “I’m amazed that this governor wants to throw Bill Batchelder and Keith Faber under the bus, even though they were complicit.”

Batchelder, who was House speaker before retiring due to term limits, signed a formal protest letter that Adams circulated after the Kasich administration submitted its Controlling Board request.

Before the Controlling Board vote, Senate President Faber insinuated Kasich had backed lawmakers into a corner by threatening to bankrupt Ohio’s Medicaid program if Obamacare money was not appropriated.

The House speaker and Senate president can swap Controlling Board members at will. Batchelder and Faber stacked the panel so Kasich’s Obamacare funding request would be approved.

“I was there. We had a solution our caucus could have chosen,” Adams said, explaining that he and Rep. Jim Butler previously met with Batchelder and shared a list of options for treating Ohio’s drug-addicted, mentally ill and working poor without taking Medicaid expansion money.

But at the October 21, 2013, Controlling Board hearing where Kasich’s Obamacare funding request was approved, Ohio Department of Medicaid Director John McCarthy said Medicaid expansion was necessary to serve Ohio’s needy.

McCarthy publicly threatened to bankrupt the entire Ohio Medicaid program if the Controlling Board refused to appropriate the money.

Controlling Board President Randy Cole — who was appointed by Kasich — repeatedly steered the panel’s conversation away from concerns about Medicaid expansion’s long-term costs and sustainability. No testimony opposing the expansion was heard.

Republican State Rep. Nino Vitale told Watchdog.org he was one of several legislators to protest inclusion of the expansion in Ohio’s 2016-17 budget. Vitale spoke against the policy on the House floor before voting against the budget. Three other Republicans in the General Assembly joined him. All four cited the Medicaid expansion as a specific reason for their votes, and several lawmakers voted for the budget only after voicing opposition to the expansion.

The Kasich campaign did not respond to a request for comment.

Thanks for that timeline-it explains what I had heard about this.
MM

Kasich is a big time social lib and his record proves it. The expansion of Medicaid and Common Core are just a couple of examples. He tried the same Union reform that Scott Walker did, and was handed his head on a platter. He carried no influence in Ohio when Romney ran for President. He's a carbon copy of Jeb.

And yet he just overwhelmingly won the GOP primary in Ohio and will probably win another election as Governor if he runs. So he "out-maneuvered" the Ohio legislature by using a legal and legitimate line item. Sounds like sour grapes about ancient history on your part.

And who else cares anyway? Kasich isn't going to be the GOP nominee since he can't seem to win many primaries outside of Ohio.

He not only "pressed" the legislature to vote for it, he implied that if they voted against it, they'd go to Hell for it. Seriously...he asked the head of the Senate, "What are you going to do when you're standing outside the pearly gates and St. Peter asks you why you voted against poor women and children." Personally, my response would have been, "Wow, Peter, I expected you to be inside! What happened?!"

What they say and what they did are two different stories, is kasick not fit for office.