PRISON IS CALLING LOIS LERNER: Still No Justice for the Victims of the Obama's Weaponized IRS

The report reminds us of the scandal:

“Before examining the role that those left-wing nonprofits played in the saga, some background is necessary. In the lead up to the 2012 election, many conservative organizations and Tea Party groups that had sought tax-exempt status from the IRS were frozen in limbo, unable to participate fully in election season because they were wasting away on an IRS waiting list specifically created to stymie right-leaning groups hostile to President Obama’s radical left-wing agenda.”

“The very fact that Lois Lerner isn’t in prison right now is proof of political interference at the highest levels. Lerner lied to congress, committed, contempt, and engaged in obstruction of justice on a massive scale. Yet nothing happen to her.”

The chairman of the House Oversight Committee, Rep. Jason Chaffetz (R-Utah), noted that the “Obama administration continues to refuse to hold anyone accountable at the IRS." This comes after an interview in which President Obama said that not even “a smidgen of corruption” would be found during the investigation into the IRS scandal.” 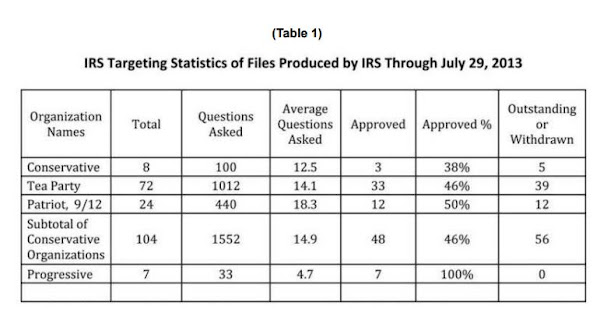 “The Left’s ‘accountability’ actions focus on harassing and intimidating political enemies, disrupting their activities, and forcing them into waste resources dealing with activist’s provocations… They want to shut down, humiliate, and silence those who won’t quietly submit to their policy agenda.”

So long as politicians are all insiders, there will be no criminal complaints brought. If Hillary goes down, it won't be because she committed a crime, which she has... many... it will be because the party(ies, really) decided she is more of a problem than a solution. Bureaucrats and politicians are no longer held to any legal standards.

I don't know if Trump would fix that, though I doubt it. He has too much on his plate already. Won't get all of it as is. It would take a number of elections of non-party affiliates to begin breaking through those problems.

Points to the Apeon comment. Apparently another "scholar". If - and God help us if - Trump were to become president, he can't prosecute anything if Obama granted a pardon (even a preemptive one). Is this indicative of all Trump supporters? A deep lack of understanding of basic civics? Lerner is a symptom of a much more pervasive problem and it's endemic with a large and unaccountable federal bureaucracy (the executive branch in particular). Until and unless the size, scope and breadth of the federal government is dramatically reduced, these abuses will not only continue they will become more intrusive - regardless of party affiliation. For the record - I do not support and never will support any Democrat running for high office. As Trump hasn't and frankly can't earn my vote - guess I'll be sitting this next election out if he actually earns the nomination.

By deferring criminal prosecution the obama DOJ nerely postponed Lerner's trial until a new administration takes over and files charges.

Comparing specifics to generalities is the only way you can convince your paid off sold out self that you and yours are right. You are wrong and will remain so. I doubt if even you believe your bullshit, but it's all you have. You don't even have an electorate that believes you any more. Hopefully, soon, you will also lose any connection to power and money that you currently maintain through mouthbreathing. You aren't elite, aren't even connected to it, and you will find this out sooner or later.

Best to hitch your wagon to the winning team or prepared to look for a job where you actually have to do something functional. Good luck with that, if you maintain your elitist attitude.