Despite fears that dozens of Somali immigrants have disappeared from Minnesota communities and believed to have joined ISIS, Barack Obama's efforts to import more Somalis into the U.S. continues unabated.

Over 700 Somali colonists arrive each year and are distributed into select communities around the country.

Is your city due to have its own Molenbeek (the Islamic section of Brussels)?

The Islamic State’s Cyber Army used an online cellphone app to post a “kill list” of names, addresses, phone numbers and other personal information on 36 police officers in the Twin Cities area of Minnesota.

The FBI said this week it is investigating the case but analysts say it’s obvious why ISIS chose to target the Minneapolis-St. Paul area.

The area is home to America’s largest Somali refugee community and has been a hotbed of Islamic terrorist recruitment dating back to at least 2007. Since then more than 34 young Somalis have left Minnesota to join the ranks of foreign terror groups, including the Islamic State in Syria and al-Shabab in Somalia. Others have been convicted of sending material support to overseas terrorist organizations...

...The [radicalization] problem has only gotten worse since 2009. Andrew Luger, the U.S. Attorney for Minnesota, admitted last spring, after six more Somalis were arrested for trying to board planes bound for Turkey with plans to join ISIS, that his state has “a terror-recruitment problem.”

Yet, the Obama administration has kept the pipeline of new Somali “refugees” well-oiled. They continue to come at a rate of 700 per month, most of them coming from United Nations’ camps in Kenya – camps that the Kenyan president has threatened to shut down because of their suspected ties to terrorist attacks inside his country. 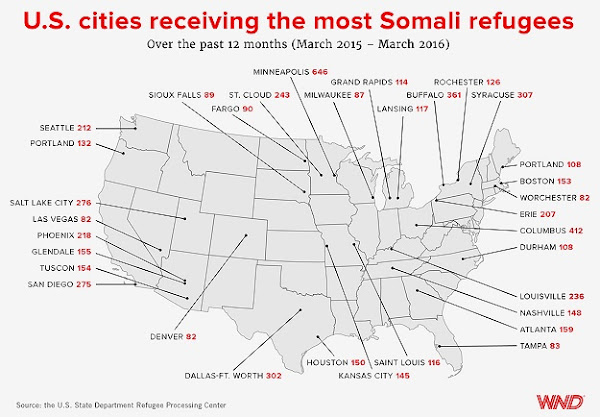 The problem of terror recruitment in Minnesota has become so palpable that the federal government is now issuing grants to nonprofits for the purpose of teaching young Somalis not to succumb to the temptation of joining “extremists” like ISIS and al-Shabab.

It's pretty clear what Mr. Obama's agenda is, even though no one in Washington's "polite society" will admit it.

We're accumulating refugees similar to how we accumulated the debt, but now it's thousands here, tens of thousands there... and pretty soon we'll wonder how the Democrat's voting bloc became so big. It's community organizing at its best I suppose, something to be proud of they say, but I'm not feeling the love.

I'm in Minnesota. So are tons of Somalis. Isn't it a GOOD thing when they decide to pack back up and head out to fight their wars?

@bobby - they come back. They have ties and support within the community here. Those are all problems. Here's another issue with this - all those so-called non-profits that sponsor or otherwise facilitate all these people (who are eventually hostile to our way of life) lobby for, and profit from bringing more in. And they have been successful in doing so and are pushing for even greater numbers. We've turned this into a business and of course crony capitalism (or corporatism) is building on it. We're so screwed.

Close this country for 50 years.