TIME IS RUNNING OUT: Obama's Final Solution for Israel

Obama’s campaign against Israel has run into one major obstacle… Muslim terrorists.

Every Obama attempt to force Israel to make concessions to the Islamic terrorists who run the Palestinian Authority has been rejected by the terrorists. No matter how much Obama got Israel to offer, it was never enough.

Abbas, the leader of the PLO, Fatah and the Palestinian Authority, has turned down every Obama offer culminating with the latest offer brought now by Biden on a visit where Abbas’ political movement had celebrated the murder of Taylor Force, an Iraq War veteran. Like the “moderate Taliban” and the Muslim Brotherhood, Obama’s outreach to Muslim terrorists failed because of the terrorists.

In the last major effort at a peace process with the PLO, Obama attempted to bypass this problem by effectively having Kerry negotiate with Israel on behalf of the terrorists. Kerry pretended to “facilitate” negotiations between Netanyahu and Abbas, but in reality it was only Kerry and Netanyahu at the table. Kerry pressured Israel into making numerous concessions to the PLO while negotiating for the PLO.

As one Israeli official put it, “At one point we discovered that throughout the entire period, the Americans didn’t actually talk to the Palestinians, only to us.” 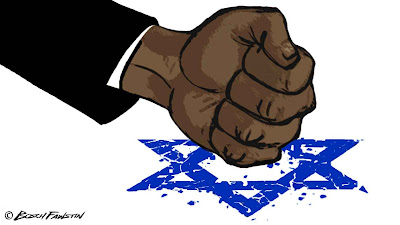 According a senior American official, the Obama-Kerry position was closer to the PLO side and so they didn’t even bother negotiating these arrangements with the PLO.

Obama and Kerry had explicitly become proxy negotiators for an Islamic terrorist organization.

But the Obama plan to impose his own framework on Israel failed once Abbas was brought into the loop. The terror leader rejected the Kerry plan. Just as he rejected Biden’s latest offer. Not even a two hour meeting with Obama in the Oval Office could change his mind.

Once again, Obama had been hung out to dry by the Islamic terrorists he had been trying to help. No matter how close his position is to the terrorists, it’s never close enough.

Kerry nevertheless blamed Israel, not Abbas. The White House position is that it’s Netanyahu’s fault. In a recent Atlantic piece, Obama blamed Netanyahu for being too “fearful” to bring peace. While this makes for great propaganda justifying further hostility toward Israel and Netanyahu, the actual obstacle is Abbas. You can’t negotiate with Islamic terrorists. All you can do is surrender to them.

Abbas has shown that he won’t accept a peace plan. Negotiations have failed every time. And every failure undermines the Obama narrative that Israel is to blame. It’s hard to keep that myth alive when Netanyahu agrees to negotiate and Abbas doesn’t, when Israel makes concessions and the PLO won’t.

And yet Obama is determined to achieve his goals for Israel and the Middle East before he leaves office. To do that, he has to bypass the negotiations process and impose his own solution without having to get consent for it from the PLO. That means that like the Iran deal, it won’t be binding on terrorists. But it will be binding on the United States and on Israel. It will go through an international forum such as the United Nations to avoid the humiliation of Abbas rejecting yet another Obama offer.

The peace process with the PLO has amounted to decades of Israeli concessions in exchange for nothing. Even the most hypothetical concessions quickly became the default starting point in the next round of peace proposals. Every experimental measure, no matter how it failed, was soon set in stone.

The Obama framework would be a radical set of demands for Israeli concessions disguised as a peace plan. These are demands that Israel could not afford to agree to, but that the terrorists would still consider insufficient. There is no carrot here. Only a set of heavier and sharper sticks.

Israel is expected to agree to the demands in fake multilateral negotiations with the terrorists, that are really only negotiations between Obama and Netanyahu, or Obama will present his own wish list for Israeli concessions unilaterally to the UN. Either Israel kicks Obama’s football one more time in the hopes of getting something out of it or it doesn’t kick the football and loses even more as the US joins an anti-Israel pressure bloc at the United Nations to impose those same terms on the Jewish State.

Netanyahu has tried to run out the clock on Obama. Now that the clock is actually running out, the danger hour is here. Obama is ideologically opposed to Israel. He has nursed a personal grudge against Netanyahu. And he refuses to leave office without a trophy to justify his disastrous foreign policy.

A final agreement in which both sides will agree to coexist is not on the table here. If there were even a possibility of that, Obama would not have cut Abbas out of the process the way that he did. Instead the peace process has been boiled down to its essential element of pressuring Israel into expanding the existing the PLO terror state while getting nothing in return except more terrorism.

The next step in a process that led to rockets falling on Tel Aviv and Jerusalem is supposed to move forward with the ethnic cleansing of hundreds of thousands of Jews from their homes and international troops deploying in Israel.

All these were already on the table at the last negotiations. And the terms will only get worse.

This is not a peace process since peace is not the expected or desired outcome. The only agenda here is the expansion of a terror state at the expense of Israel, at the expense of the lives, homes and property of the Jews living there, and at the expense of the future of the Jewish state. No one seriously believes that Obama’s framework will bring peace. Instead it will increase terrorism while moving on to demands for more territory even deeper inside Israel, whether through territorial claims or the right of return.

Obama knows that he can’t even achieve an agreement with the terrorists. He also knows that Israel will attempt to negotiate in good faith. So he’s preparing to trash the last remnants of the negotiating protocols to simply impose a set of concessions on Israel as an international framework for peace.

The previous negotiations featured PLO demands for concessions as a pre-condition to talks. Obama will dispense with the talks entirely and skip right to the concessions. There may be a meaningless acknowledgement slipped in there that Israel is the “nation-state of the Jews”, a point that the PLO won’t acknowledge and that is a formality that achieves nothing of any strategic and territorial worth. But it will be a mandate for the drastic expansion of a failed Islamic terror state that has abandoned even its ritual fake elections and that subsidizes its Islamic terrorism with American taxpayer money.

At the last negotiations, Obama’s people openly served as proxy negotiators for the terrorists. Now they’re going to skip straight to imposing the demands of the terrorists on the Jewish State.

To justify this radical course of action, this final break with the pretense that the Democrats are supportive of Israel, a hate campaign against Israel and Netanyahu has been whipped up in the media. The familiar narrative blames Israel for the lack of peace, even though it’s Abbas who rejected Obama’s own peace offers more than once. The demonization of the Jewish State is a necessary prerequisite to the final betrayal. Israel has to be depicted as utterly unwilling to make peace with the terrorists, forcing Obama to impose his own solution. Each White House attack on Israel was preceded by propaganda laying the groundwork for its actions by demonizing Israel and Netanyahu.

The more you hear this “Big Lie” in the media that Israel is to blame for everything, the closer Obama is coming to his final solution for the Jewish State.

The same happened with Bill Clinton, Palestinian Authority chairman Yasser Arafat and Israeli prime minister Ehud Barak during the Camp David Summit in 2000. The Palestinian's and muzzies in general would rather kill Jews and Christians than make peace with them. The Palestinian's would have their own state right now if not their desire to conquer and kill.

More and more it looks like Obama's solution to the problem is an old one. One that failed in the 40s.

"You wait and see what I do to the Jews." Little Barry ain't done yet.