THANKS, OBAMA AND HILLARY! Escaped Women Describe Their Horrific Lives Under ISIS Rule

A group of activists, bloggers, and filmmakers are raising their voices against the propaganda machine of the Islamic State (ISIS) by sharing personal stories of those who have experienced the group’s terror first hand.

The self-declared caliphate’s recruitment strategy promises a fantastic life under their control to those wanting to serve what they consider to be a noble cause. To counter the fictitious and sensationalist propaganda, the Open Your Eyes movement exposes the reality of life under the Islamic State with the aim of showing potential new recruits they are actually joining a death cult — and that what they are being told is lies.

Reiterating that ISIS is not the voice of 1.6 billion Muslims — that it is warping the teachings of Islam and perverting the religion they love — the Open Your Eyes movement was launched by British Muslims. Exposing the utter barbarity of the terror group in the hope of reaching those considering making the journey of no return, it lifts the veil on the brutal reality of life under ISIS control. The movement claims ISIS is prolonging the suffering of Muslims throughout the world and says new recruits are little more than pawns on the chessboard of global power games.

Thanks to those who risked torture and death to recount their suffering, Open Your Eyes is able to share the reality of life in Mosul, Iraq, as well as the stories of Syrian journalists who have escaped torture in their attempt to crush Islamic State propaganda.

“Death is better than this” 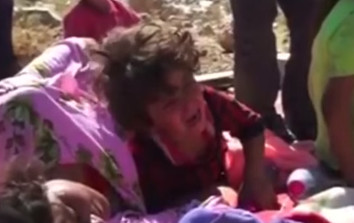 Women in Mosul have had to adapt to ancient ways of life since ISIS took control. In secret interviews with the women, they described life before the takeover, when they had electricity, they could bake and cook, and their basic needs were met. Now forced to use wood for cooking, and without food or work, they have been forced back in time. There is no electricity or drinking water, and public services have stopped. Covert filming reveals streets strewn with garbage, flies and disease. The women have said even the drinking water smells bad, and that when children drink it, they get get stomach aches and diarrhoea and have to be taken to hospital. They said ISIS has imposed their beliefs on them and complain they are forced to wear face veils (abaya). They said the terror group are often violent towards them and beat them:

“I hope that if ISIS go — god willing — we will go back to our normal life, wear normal clothes, go out and visit our relatives and get out of this prison they have put us in,” one of the women said.

“What kind of life it this?” Another added. “Death is better than this.”

“They took us back to the stone age”

A student in ISIS-controlled Mosul, Iraq’s second largest city, said many universities have become places of residence for members of the terror group and their families. Anyone wanting to leave the city must first appear in the Shar’ia court, where someone must act as a guarantor for them to leave. If they don’t return, the guarantor is arrested. Islamic State policies have resulted in textbooks being destroyed, the cancellation of courses, and university departments being shut down.

“They stole the future of most students,” the student said, recalling how he was made to let his hair and beard grow long. He was forced to wear loose clothes and jeans, and bright colours were forbidden. He claimed he can no longer go out with his friends. Smoking is forbidden, and if caught, offenders are whipped and their fingers broken.

“We reject the policies of Daesh because they are nothing but violence and backwardness. The only thing they do is kill people, they took us back to the stone age away from humanity,” said the student.

Renowned for treating journalists particularly harshly, ISIS leaders do not want the truth of those espousing different views to come out. Ahmad, a Syrian journalist, escaped after 50 days of being captured and tortured. Kept blindfolded and tied to a chair while suffering beatings and electric shocks to his genitals, he believed he would never get out and worried for the future of his young son. He said if he could have ended his life, he would have, saying he thought about suicide a great deal during his captivity. In prison, Ahmad was surprised to see that a former friend was the main torturer. After 50 days, an uprising between various factions and ISIS saw some of his captors killed. Ahmad and the other prisoners were able to break down the doors and escape.

“Daesh are going to disappear in Syria,” Ahmad said, “because nations need laws and solid foundations to thrive, but ISIS was founded on blood.”

Another journalist from Aleppo, Milad Shehabi was writing an article on the Syrian regime’s airstrikes when a group of men dressed head-to-toe in black came to the door and kidnapped him. With seven guns aimed at him, he was warned that if he moved, he would be shot. Kept blindfolded by ISIS for 45 days before being freed by the Free Syrian Army, he said the only thing he could hear in captivity were the sounds of torture and air raids. “We wished they would drop bombs on us to escape the reality we were facing,” he said.