STUNNING WASHINGTON POST REPORT: Hillary Caught in Her Own Web of Lies

Yesterday, The Washington Post's Robert O'Harrow, Jr. published a startling timeline related to Hillary Clinton's email scandal. The executive summary: she's a criminal and a liar, but you already knew that.

...unknown to diplomatic security and technology officials at the department, there was another looming communications vulnerability: Clinton’s Black­Berry was digitally tethered to a private email server in the basement of her family home, some 260 miles to the north in Chappaqua, N.Y., documents and interviews show ... Those officials took no steps to protect the server against intruders and spies, because they apparently were not told about it.

The FBI has now very likely confirmed that multiple crimes were committed in the handling of classified material and, as a bonus, foreign intelligence agencies hacked the s*** out of her server.

One hundred forty-seven FBI agents have been deployed to run down leads, according to a lawmaker briefed by FBI Director James B. Comey. The FBI has accelerated the investigation because officials want to avoid the possibility of announcing any action too close to the election.

O'Harrow, as you will learn, has a gift for understatement: 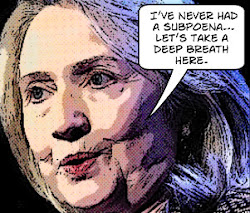 From the earliest days, Clinton aides and senior officials focused intently on accommodating the secretary’s desire to use her private email account, documents and interviews show.

Throughout, they paid insufficient attention to laws and regulations governing the handling of classified material and the preservation of government records, interviews and documents show. They also neglected repeated warnings about the security of the BlackBerry while Clinton and her closest aides took obvious security risks in using the basement server.

Oh, and there's the simple matter of "the most transparent administration ever":

The unfolding story of Clinton’s basement server has outraged advocates of government transparency and mystified political supporters and adversaries alike. Judge Emmet G. Sullivan of the U.S. District Court in Washington, D.C., who is presiding over one of the FOIA lawsuits, has expressed puzzlement over the affair. He noted that Clinton put the State Department in the position of having to ask her to return thousands of government records — her work email...

...One year earlier, during her own presidential campaign, Clinton had said that if elected, “we will adopt a presumption of openness and Freedom of Information Act requests and urge agencies to release information quickly.”

But in those first few days, Clinton’s senior advisers were already taking steps that would help her circumvent those high-flown words, according to a chain of internal State Department emails...

Clinton and her staff had been warned that their BlackBerry devices could have been "tagged, tracked, monitored and exploited between your disembarking the airplane and reaching the taxi stand at the airport ... And when you emailed back home, some or all of the malware may have migrated to your home server. This is not hypothetical.”

That was no matter to the Clinton crew:

At the time, Clinton had just returned from an official trip that took her to China and elsewhere in Asia. She was embarking on another foray to the Middle East and Europe. She took her BlackBerry with her.

Despite this and other repeated warnings, Clinton kept using her bathroom email server and her personal BlackBerry.

As for handling classified information, Hillary -- try and contain your surprise -- lied her pantsuit off.

“What you are talking about is retroactive classification,” she said during a recent debate. “And I think what we have got here is a case of overclassification.” Her statement appears to conflict with a report to Congress last year by inspectors general from the State Department and the group of spy agencies known as the Intelligence Community. They made their report after the discovery that four emails, from a sample of 40 that went through her server, contained classified information.

Oh, and multiple laws were violated:

• Under Title 18, Section 1924, of federal law, it is a misdemeanor punishable by fines and imprisonment for a federal employee to knowingly remove classified information...

• ... before Clinton took office in National Archives and Records Administration Bulletin 2008-05 [was issued], which said every email system was supposed to “permit easy and timely retrieval” of the records...

• ... Under Title 18, Section 2071, it is a misdemeanor to take federal records without authorization, something that is sometimes referred to as the “alienation” of records. The law is rarely enforced, but a conviction can carry a fine or imprisonment...

• ...Jason R. Baron, a former director of litigation at the National Archives and Records Administration, told the Senate Judiciary Committee last year he believed that Clinton’s server ran afoul of the rules. In a memo to the committee, Baron wrote that “the setting up of and maintaining a private email network as the sole means to conduct official business by email, coupled with the failure to timely return email records into government custody, amounts to actions plainly inconsistent with the federal recordkeeping laws.”

My issue with government "transparency" (it isn't) stems from the fact that other than actual classified, truly sensitive and legal information, all of it's business should be conduced in the open. No need to ask for information - it's already there. Of course the powers that be would never acquiesce to this as the control of information of ultimate power. Any government employee - appointed or otherwise who circumvents "transparency" laws should have the hammer dropped on them. But they never do.

So Hillary gave it up for the whole football team, even the goal kicker and cheer leaders - and we know nothing ever happens to the players, but Hillary ends up with all their secrets.